Star Wars: The Rise of Skywalker brings the “Skywalker Saga” to a mind-melting conclusion this December (if Kevin Smith is to be believed). Before then, revisit and revel in how it all began with these iconic retro action figures!

This case of Star Wars The Retro Collection Action Figures is based on the original 3-3/4-inch action figures from Kenner that forever changed movie merchandising.

These figures aren’t exactly identical in size and detail to the ones Kenner shipped in 1978. (No one wants villainous scum passing them off as originals!) But the minor differences won’t detract from the classic sheen these figures will give your collection.

Recreations of three more of Kenner’s first dozen figures round out the case:

Each figure comes on a gorgeous, instantly recognizable 6-by-9-inch cardback, adorned with the silver wraparound “Star Wars” title, the Brothers Hildebrandt’s Style B poster art, and the Kenner logo. The faux weathering is convincing, but the “Retro Collection” labeling ensures this packaging won’t be mistaken as 40+ years old.

The Scoundrel Disguised as a Stormtrooper 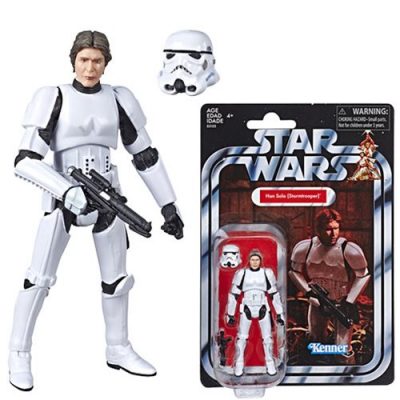 When Luke and Han go undercover to save Princess Leia from the Death Star, Star Wars’ action really ramps up.

But for eight years, fans had to swap out their figures of the boys for Stormtrooper figures if they wanted to reenact the rescue accurately.

In 1984, Kenner’s fabled “Power of the Force” line finally gave collectors a Luke-in-Stormtrooper disguise figure; it became “one of the most popular boy’s toys from the 1980s,” according to action figure expert Mark Bellomo.

But a similar figure for Han wouldn’t follow until 1995 – as a mail-away premium from Kellogg’s Froot Loops!

Now, the reluctant but reward-seeking rogue gets the full Kenner-carded treatment: the exclusive Star Wars The Vintage Collection Han Solo (Stormtrooper). This figure boasts a more realistic body physique than the comically bulked-up 1995 figure. It also has an amazing likeness of Harrison Ford’s face!

Impressive attention to detail, multiple points of articulation, blaster, and removable helmet make this figure a must-add for any Star Wars collection. (Plus, its price means you don’t have to rescue a princess to make it fit your budget!)

Few film characters have made as big an impact on pop culture as the characters of Star Wars have.

So make sure you celebrate these famous film faces by trusting Entertainment Earth to help you fulfill all your action figure needs from the Galaxy Far, Far Away!