The Fight Rages on with These 2 Street Fighter V Action Figures!

The high octane, addictive action of the Street Fighter series has enchanted every gamer who has taken on the challenge. From the humble beginnings of the mostly forgettable original game, to its bombastic sequel, to the many other spin-offs and iterations, Street Fighter lives in our hearts as the archetype of what a fighting game should be. No other fighting game even comes close. What makes Street Fighter so great isn’t just the fantastic gameplay mechanics and exotic settings – it’s the characters! Now you can bring two of the beloved characters home in a brand new way.

The Street Fighter V Cammy SH Figuarts Action Figure joins the already popular Figuarts line! Cammy, the second female to challenge the burly fighters of the street, debuted in Street Fighter II: The New Challengers, right about the time that the public was wondering if they would ever see a Street Fighter III. She really gained her footing, however, in the Street Fighter Alpha series, where her quick, lithe fighting style was a favorite of many gamers. Seen her as she appears in SFV, Cammy is designed from the ground up to portray the video game characters perfectly. With two facial expressions, two pairs of hands, a Cannon Strike effect, and a background sheet, this amazing action figure will take your breath away! 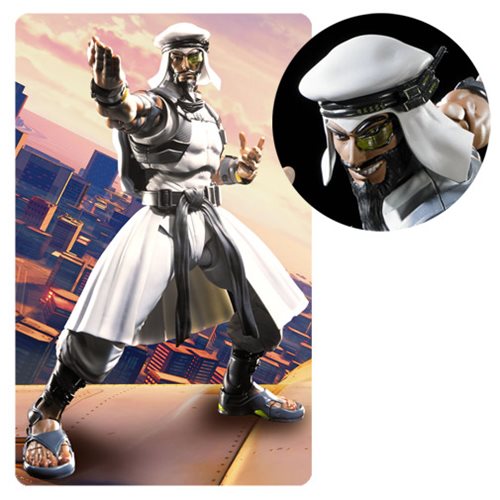 Also joining the brawl is this Street Fighter V Rashid SH Figuarts Action Figure. Rashid first joined the street fight in Street Fighter V. A laid back fighter from the Middle-East with an affinity for the latest technology, Rashid’s fighting style takes many players by surprise. With high, acrobatic kicks and an ability to control the wind, he is a formidable foe and a great playable character. This action figure also features two facial expressions and two sets of hands. He also has an included Eagle Spike effect and a background sheet.

These figures are designed with the collector in mind. With detail and features of the most impressive quality, this series of action figures continues to impress all who collect them. Measuring in a just under 6-inches tall each, they complement the other figures in the series. Head over to Entertainment Earth today to pre-order yours!