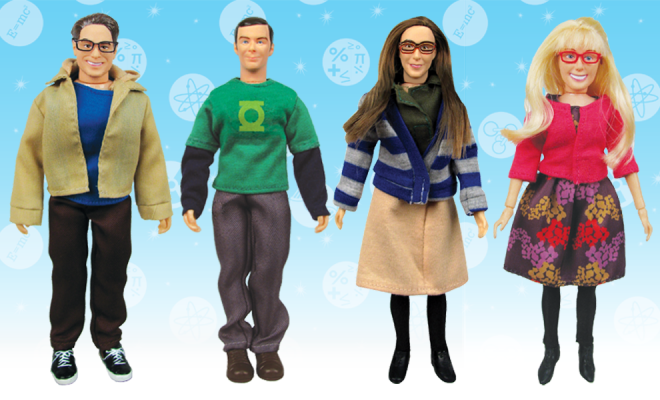 These Action Figures from Bif Bang Pow! come straight from the sitcom The Big Bang Theory and are available now at Entertainment Earth! Standing approximately 8-inches tall in episode-specific inspired clothing and a retro style that harkens back to the bestselling Mego action figures of the 1970s and 1980s, these figures feature multiple points of articulation.

Dr. Leonard Hofstadter is “Everyman” – provided “Everyman” has an IQ of 173 and Ph.D. in Experimental Physics. When he’s not doing research at the University, Leonard lives in a Pasadena apartment with colleague and friend Sheldon Cooper. Together, they proudly share a love of superheroes, video games and all things “geeky”. Leonard is also very earnest in developing his relationship with on-again, off-again, but now definitely on-again girlfriend Penny, who lives across the hall. Leonard’s family is composed of many accomplished academics including his mother, Dr. Beverly Hofstadter, and his brother and sister. Superpowers: Solving differential equations, playing the cello. Weaknesses: Eyesight, lactose intolerance 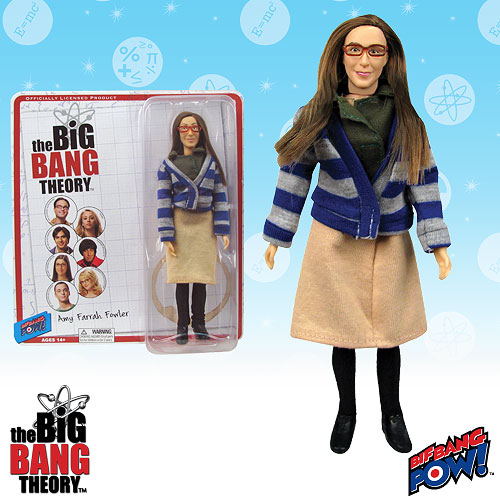 Dr. Amy Farrah Fowler is a neurobiologist who first popped up as a possible match for Sheldon through an Internet dating site (that Howard and Raj signed him up for without his knowledge!). Amy, like Sheldon, is a genius who has previously avoided relationships. In fact, she only met Sheldon because she was fulfilling her promise to her mother to go on at least one date a year. Things have changed for Amy, however, as she is now living the life she always dreamed of as a pubescent teen. Penny and Bernadette are her best friends and she has succeeded in making Sheldon Cooper her boyfriend. (Relationship agreement penned by him, of course. Swoon!) She even shared a Valentine’s Day kiss with Dr. Cooper. Superpowers: Dissecting brains in the name of research, playing the harp. Weaknesses: High libido, Sheldon Cooper’s lips, tiaras.

Dr. Bernadette Maryann Rostenkowski-Wolowitz is a pint-sized scientist who, aptly, has a Ph.D. in Microbiology. Her height is a source of sensitivity due to a childhood bully, who once replaced her clothes with an elf’s costume. That was still too large. Bernadette is also not a huge fan of children. This stems from her forced employment at the illegal daycare center that her mother ran out of their home’s basement. Additionally, Bernadette’s father was a police officer. This is something that she admits caused her anxiety as a child as she worried about his safety constantly. She and Howard met on a blind date through Penny and instantly bonded through their mommy issues. Superpowers: Safely handling the world’s most deadly viruses, Mrs. Wolowitz impressions (it’s uncanny!). Weaknesses: Scarily competitive. Doesn’t know how to ride a bike (because her mother thought she would lose her virginity going over a bump!), Mrs. Wolowitz impressions (it freaks Howard out!).

Howard Wolowitz is an engineer in applied physics. He recently retired his “ladies man” aspirations and married girlfriend Bernadette Rostenkowski, who he initially bonded with over disdain for their overbearing mothers. Even though he’s constantly picked on by Sheldon for lacking a Ph.D., Howard achieved the prestigious accomplishment of going to space (and will never let his friends forget it). He also has a gift for celebrity impressions, and a horrible nut allergy. Superpowers: Expansive belt buckle collection. Weaknesses: Dominated by his mother and now his wife.

Dr. Rajesh “Raj” Koothrappali is a sensitive soul; the kind of guy who’s not afraid to kick back with a glass of wine and a good “chick flick”. But make no mistake, he’s all man. Recently, Raj overcame a lifelong inability to speak in the presence of women. Now, he must learn what to actually say to a woman that won’t send her running. Originally from New Delhi, India, Raj works in the Physics department, where he specializes in particle astrophysics. Occasionally visited by his sister, Priya, who’s a lawyer, Raj often communicates with his Indian parents, Dr. and Mrs. Koothrappali, through a webcam. In his spare time, Raj likes to stage mystery dinner theatre and scavenger hunts for his friends. Superpowers: Collecting comic books, astronomy. Weaknesses: Colloquial conversation, nervous bladder, his pronunciation of “moustache.”

Penny is the typical “girl next door” – if the girl next door happens to be beautiful (and technically lives across the hall). Originally from Omaha, Nebraska, she is an aspiring actress, who once moonlighted as a waitress. Outgoing and self-assured, Penny’s personality often contrasts with those of the guys. Although it’s not like they haven’t rubbed off on her, as she once developed an obsession with online fantasy games. Despite the fact that she and Sheldon don’t always see eye to eye, she has proved to be a good friend. Something of a leader to her friends Amy and Bernadette, Penny has become more serious in her relationship with Leonard and her acting career (with a star turn in the cult sci-fi sequel Serial Ape-ist 2.) Superpowers: Kindness, assertiveness, shopping. Weaknesses: Limited sci-fi knowledge, shopping.

Dr. Sheldon Cooper is smarter than you – and he’s not afraid to say so. A theoretical physicist possessing a master’s degree, two Ph.D.s, and an IQ of 187, Sheldon is originally from East Texas, where he was a child prodigy, starting college at the age of 11. He has zero interest in romance, as his only real love is science (although his “girlfriend” Amy is constantly finding loopholes in their “Relationship Agreement” to disprove this theorem). He is a stickler for routine and is very different from his family; his mother, Mary, is a devout Christian, and his twin sister, Missy, is not a scientist by any means. Superpowers: Eidetic memory, Vexillology, Tuvan throat singing. Weaknesses: Understanding sarcasm, driving.