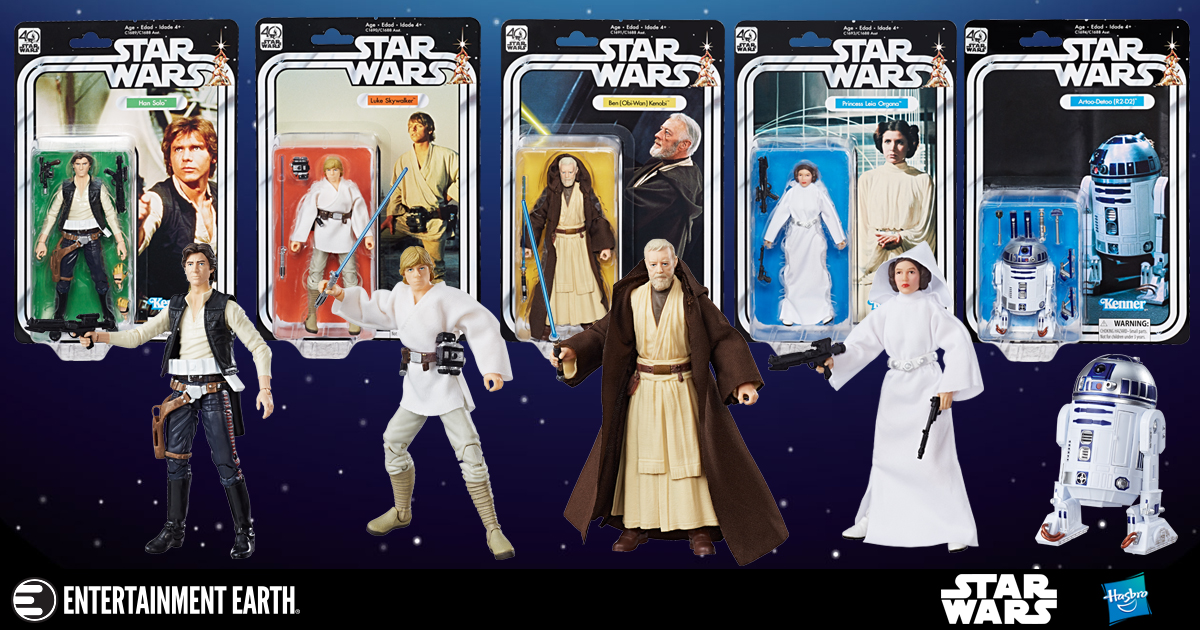 It’s hard to believe 2017 marks the 40th anniversary of the original Star Wars. The world’s first glimpse of that far-away galaxy “a long time ago” is really starting to be “a long time ago,” isn’t it?

Thankfully, Hasbro is making it feel like the adventures of Luke Skywalker burst onto the scene only yesterday! Check out these retro-style Star Wars action figures joining the acclaimed Black Series line just in time for the franchise’s big 4-0!

Now tell the truth: If you saw these hanging on the pegs at your local toy store, wouldn’t you do a double take?

Sure, on close inspection, you wouldn’t mistake this first wave of 40th Anniversary Star Wars figures for their 1978 Kenner counterparts. At 6-inches tall (excepting R2-D2, of course), they’re almost twice as big. And with an impressive 20 points of articulation (again, excepting Artoo), they’re a lot more flexible.

Our heroes have also gotten wardrobe and accessory upgrades. Princess Leia and old Ben Kenobi have ditched their plastic cloaks for fabric ones, for instance. Luke’s no longer stuck with a lightsaber that slides up and down inside his arm (that must have been uncomfortable). And R2 gets the extendable “sensorscope” not actually seen onscreen until Star Wars: The Empire Strikes Back.

But packaged on vintage-style cardbacks that sport the same artwork as Kenner’s original releases did – right down to the old Kenner logo, and Obi-Wan’s inexplicably yellow lightsaber blade – these anniversary action figures immediately evoke that first, ferocious rush of Star Wars mania that swept the U.S. toy market.

Hasbro has plenty of fun in store for Star Wars fans and collectors this year, so don’t miss out on any of it. Pre-order your case of these expertly sculpted and lovingly detailed 40th anniversary Star Wars 6-inch action figures today, and get ready to relive the greatest space adventure in pop culture all over again! 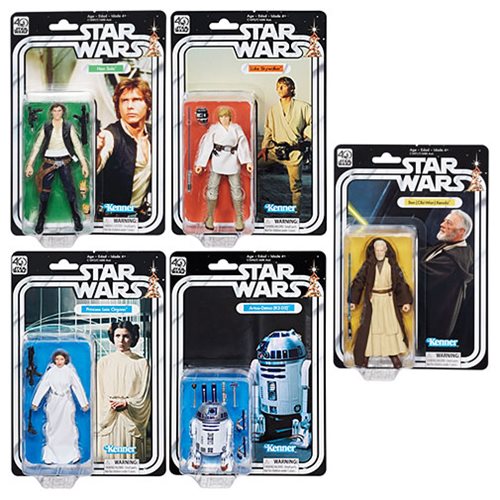 Action Figures Collectibles Star Wars Star Wars Collectibles
Related ItemsAction FiguresHasbroKennerRetroStar WarsStar Wars: A New HopeThe Black Series
← Previous Story This Sanji Statue is Sure to Give You Heart Eyes!
Next Story → Get Grossed Out with These Grossery Gang Items