The Bombshells Are Back in Black (and White)! 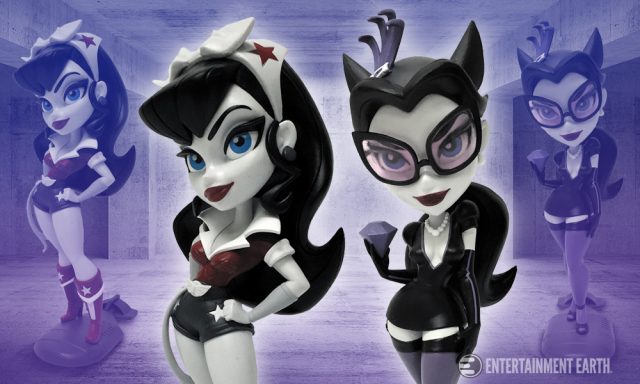 Better than a deck with six aces, these DC Bombshells noir edition vinyl figures are here to throw some dangerous curves your way!

Standing with a smirk atop her namesake, this DC Bombshells Wonder Woman Noir Edition Vinyl Figure looks like all she has to do is bat her eyelashes to get her enemies to reveal all of their secrets. This dangerous, “noir”-styled Diana is crafted mostly in black and white, however pops of her classic red and blue on her costume and face bring her to life!

Reminiscent of a feline femme fatale is the DC Bombshells Catwoman Noir Edition Vinyl Figure! A film noir seductress plucked right from the screen, this cat-eyed cat burglar poses on a missile of her own, a massive gem clutched in her hand. Subtle hints of purple reflect Selina’s signature style and evoke earlier interpretations of the Catwoman costume.

Originally imagined by Ant Lucia, these ladies were designed by Pedro Astudillo and sculpted by Anders Ehrenborg. The Amazon princess and her prowling compatriot each stand 7 1/2-inches tall and come in a windowed box perfect for display.

These fierce ladies are San Diego Comic Con exclusives, so pre-order yours from Entertainment Earth now and if there are remaining supplies, we’ll give these bombshells their marching orders in September!