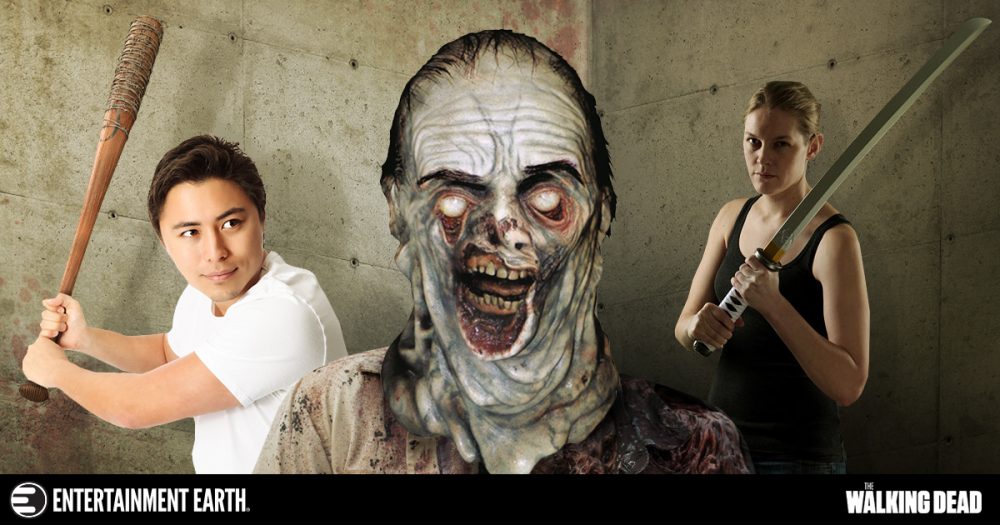 When it comes to Halloween costumes, zombies – and survivors of the zompocalypse – never go out of style. There’s a reason zombies have terrified us for decades and remain perennial favorites in horror: they’re us, only hungrier. And deader. And maybe missing a limb or two…

This fall, outfit yourself in true The Walking Dead style with these Halloween collectibles and horror masks!

The Walking Dead Mush Walker Mask is great for those of us who like simple costumes. Don this disgustingly accurate replica of season six’s most memorable walker, throw on some baggy, ripped clothes, and voila! Instant monstrous mayhem! You’re sure to make your pals shudder in revulsion in this little number.

While your buddies play the role of zombie menace, you could always go in the opposite direction and be a hard-as-nails, battle-tested, zombie slayer. The Walking Dead Michonne Sword Prop Replica will immediately turn you into just such a hero. This plastic prop replica of Michonne’s katana measures 34 3/4-inches long. Since it’s crafted of sturdy plastic it’s safe for ages 14+ and will be a great addition to any future cosplays at fan conventions!

Maybe you’re not feeling too heroic, and have no interest in playing a shambolic corpse this year. If that’s the case, perhaps you’d have more fun living it up in true villain fashion. To that end, there’s The Walking Dead Negan’s Bat Lucille Replica. You know you’re in for a bad time when a scary dude shows up with a barbed wire-wrapped bat – here’s your chance to strike similar fear into the hearts of everyone this Halloween season.

The full-size plastic bat measures approximately 32-inches long and comes in The Walking Dead-themed window box packaging, if you’d rather keep it pristine as a collection piece. For those eager to use it as a cosplay/costume prop, the highly detailed bat features markings and barbed wire elements identical to the weapon seen in last season’s finale.

It won’t be long until we see just who met their grisly end under Lucille’s not-so-gentle caress – and Halloween is right around the corner. So order your props and masks today, and make an undead statement this fall!