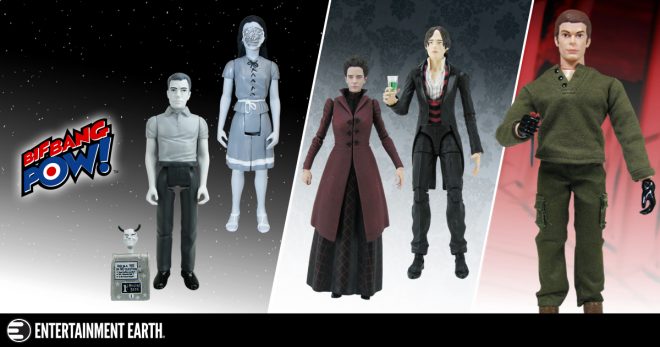 ‘Tis the season for ghoulish beasties, murderous mayhem, and dancing on the edge of madness. Perhaps you like to vacation in The Twilight Zone, or sink your teeth into a Penny Dreadful or two. Or maybe you find yourself wondering if Dexter (that nice guy next door) is harboring a deadly secret…

To that end, Bif Bang Pow! has several retro-style action figures that’ll be right at home this Halloween season.

At the edge of The Twilight Zone, there’s Alicia the android from “The Lonely”, sadly disfigured by the space captain’s gunshot, still calling out her lover’s name through her exposed circuitry (poor thing). Don Carter – the spitting image of a certain Star Fleet captain – believes he found this fortune-telling machine in “The Nick of Time”, but sometimes the need to know can keep us from truly living our lives…

Order today, and these frightening action figures will be yours in no time at all!