This Halloween in a Galaxy Far, Far Away… 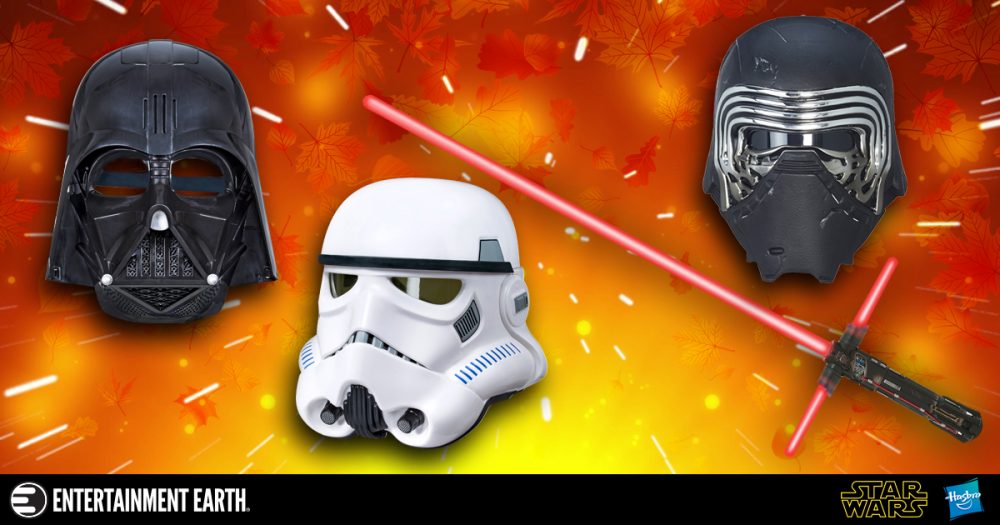 You know how important it is to really look the part. Every army has its own uniform, after all, and it’s so much easier to strike an awesome pose in the middle of a fight if you’re wearing the right duds. For those of us who prefer the Imperial flair, Hasbro has just the Star Wars prop replicas and costumes you’ll need this Halloween.

Stormtroopers may have gotten a bad reputation thanks to 30+ years of jokes and memes that spread like wildfire, but every epic conflict needs some canon fodder. And let’s not forget that Star Wars: The Force Awakens hero Finn started out as a Stormtrooper before casting off the First Order and joining forces with Rey and the Rebels.

So if looking for that last touch for your Original Trilogy costume, or you’re playing backup to Vader this year, the Black Series Imperial Stormtrooper Voice-Changer Helmet Prop Replica is a must have. The push of a button will transform your voice into that of an Imperial Stormtrooper when you’re wearing this authentic, highly detailed replica (requires 3 “AAA” batteries, not included).

Speaking of Vader: if you’d rather be one of the most infamous Sith Lords, the Star Wars Rogue One Darth Vader Voice-Changer Helmet is something you can’t go without. This mask measures approximately 12-inches tall.

But if you’d rather just gaze up at Vader in conflicted adoration, perhaps the Black Series Kylo Ren Voice-Changer Helmet Prop Replica is the one for you. This 10-inch tall x 9 1/2-inch wide helmet features adjustable straps and requires 3 “AA” 1.5V batteries (not included). Designed for ages 8 and up, nearly anybody can be Anakin’s grandson for Halloween (whoops, spoiler alert).

And if you’re going to be Ben Solo-Organa at the office party, you’ll need the Black Series Kylo Ren Force FX Deluxe Lightsaber Prop Replica to complete the look. This elegant weapon from a more civilized age features three light-up elements in the hilt and sturdy, red, polycarbonate blade to accurately mimic the look of the fractured crystal Kylo used when crafting his lightsaber.

This broadsword of a saber includes digitally recorded and motion sensor-controlled authentic sound effects from The Force Awakens, including power-up, power-down, idle, movement sounds, and clashing effects. Measuring 43-inches long and 14-inches wide, it comes with a display stand and requires 3 “AA” batteries (not included), and is recommended for ages 13+ — it wouldn’t do for a budding Sith Lord to put their eye out, after all.

Whether you’re a collector in search of authentic Star Wars prop replicas, or just an avid fan looking for the perfect Halloween costume, look no further! Order today, and you’ll be making the Empire/First Order proud by October 31st!