Marvel collectors, rejoice! The ultimate collectibles from the ultimate saga are here, and they are every bit as impressive as they needed to be. Based on original 3D references from the movie, this Thor: Ragnarok Battle Diorama Series brings the action home in a way that has never been seen before.

Start the fight with the Thor: Ragnarok Thor Battle Diorama Series 1:10 Scale Statue. Putting his hammer down, Thor stands tall and strong, giving battle to all comers with twin swords. With his protective armor and flowing cape, you can almost see the figure move onto his opponent. Thor’s detailed, hand-painted expression shows an intimidating battle cry. Standing over 11-inches high, this polystone statue is gorgeous on its own or as part of the complete set. 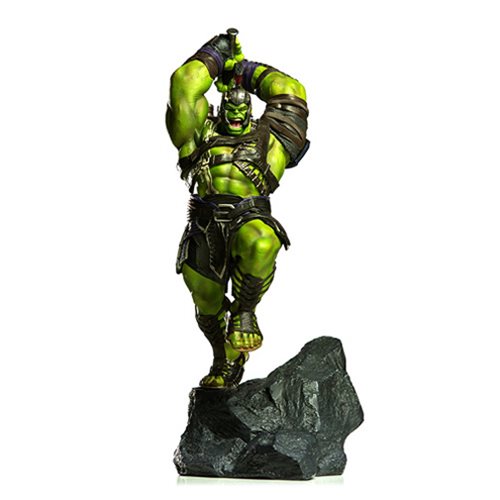 Standing tall at almost 15-inches high, you can complete the dynamic battle scene with this Thor: Ragnarok Hulk Battle Diorama Series 1:10 Scale Statue. Also based on original 3D references from the upcoming film, the Hulk will take no prisoners in this battle. Locked in gladiatorial combat with his former ally, Hulk is outfitted to fight a god.

Together or separately, this Battle Diorama Series makes the ultimate addition to any Marvel fan’s collection. Coming soon, you can pre-order these high-quality statues today from Entertainment Earth!