Celebrate 40 years of the Galaxy’s Greatest Comic with the unstoppable Apocalypse War Judge Dredd action figure!  The visual appearance of the Apocalypse War Edition harkens back to one of the most pivotal moments for Judge Dredd and the future of his city, Mega-City One, when the East Meg forces invade in a surprise attack.

At 12 1/3 inches, the Judge Dredd Apocalypse War 1:6 Scale Action Figure will dominate the Sovs. Switch up his standard scowl to show his gritted teeth with one of his interchangeable faces. Use his 29 points of articulation to pose him in a way that puts fear in the East Meg hearts. Show off his vintage blue Judge uniform and his arsenal of weapons designed to dish out justice to all creeps, perps, and the invading enemies from East Meg One who dare stand in his way!

Judge Dredd comes with stockpile of accessories, including:

Judge Dredd action figure will be available in December 2017, pre-order it now on Entertainment Earth. 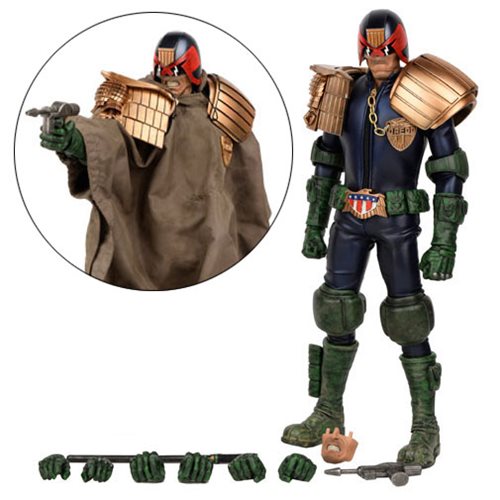