A long time ago in a galaxy far, far away… you were the most stylish person around! Why? Because you were sporting the coolest Star Wars jewelry. Represent your love of your favorite movie franchise in subtle and classy ways that keep people’s heads turning.

There are so many great pieces of Star Wars jewelry that I couldn’t possibly fit into one post so here are the top 10, all available at Entertainment Earth where in-stock orders of $79 or more receive free shipping.

There might not be a more recognizable film quote than the beginning crawl text in Star Wars. Now you can immortalize those words with this black ring, featuring the words printed in blue all the way around it. 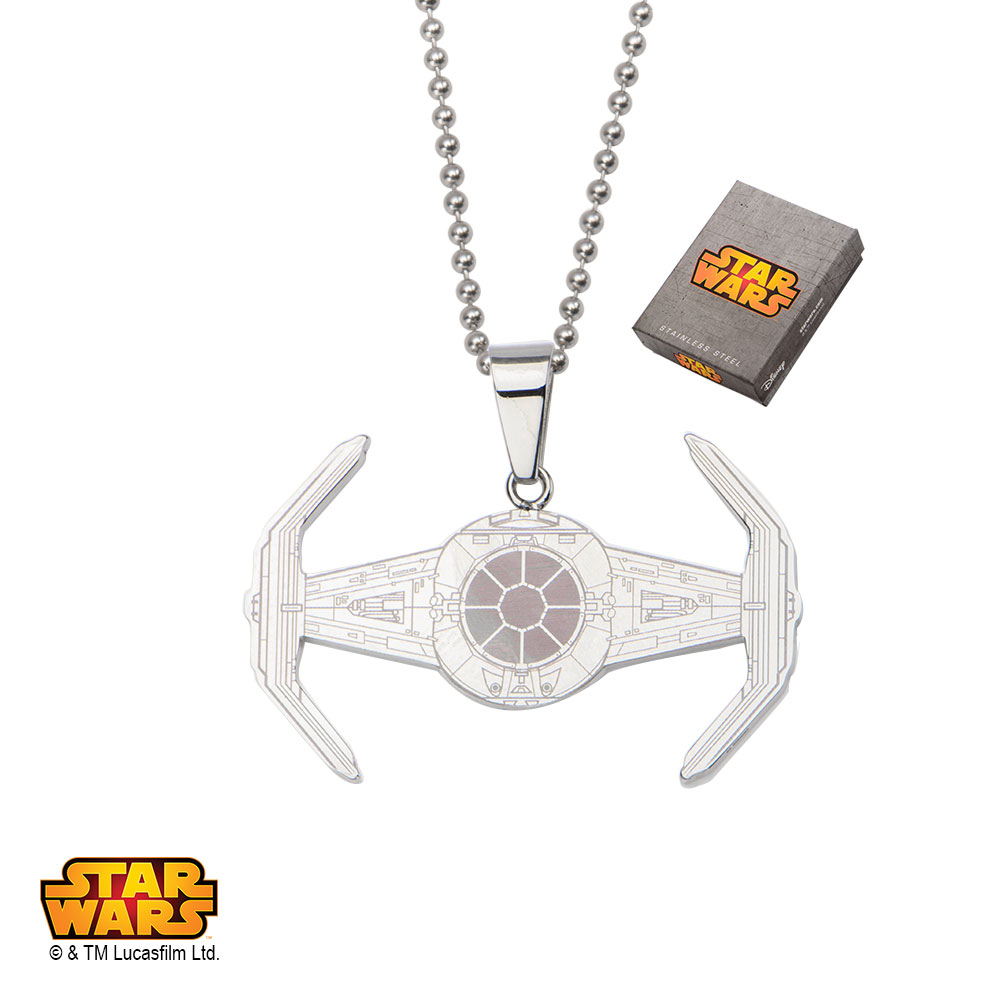 One of the coolest things in the Star Wars are all the very cool ships, like the TIE Fighters the Empire use! On one side of this necklace is an etching of a TIE fighter on stainless steel while the back is the viewfinder of the ship as it targets a rebel X-Wing with the quote: “I have you now.”

As Han Solo says, there’s nothing like a trusty blaster at your side. Now you can never be without one when you wear these cufflinks modeled after Han’s blaster itself! They are made of plated base metal with a matte black finish. They measure approximately 3/4-inches tall x 3/4-wide and feature a fixed Star Wars Logo backing.

Show your allegiance to the Empire with this Imperial etched pendant necklace! On the front is the Imperial symbol but on the back, the Death Star is etched into the pendant. The dark side will be strong with you.

Stormtroopers are definitely a popular part of Star Wars lore. Now you can show your love for them with this awesome typography necklace! In the shape of a Stormtrooper helmet, it features words you’d associate with them: “fight the rebels”, “elite soldier”, “galactic empire”, and more.

If the Galactic Empire is not where your sympathies lie, then this Rebel Alliance pendant necklace is probably just the thing for you! Align yourself with heroes like Luke Skywalker, Princess Leia, Han Solo, Wedge Antilles, Admiral Ackbar, and more. There are two versions of the necklace – silver and gold.

Menacing and super cool, Darth Maul’s lightsaber will help keep your tie in place and really spruce up your outfit all at once. You can flaunt your fandom, and let people know where your allegiance lies.

Represent the nomadic group of clan-based people, the Mandalorians, with this fantastic bracelet. It features the symbol of the Mandalorians, who are a group of people from different species, all bound by a common culture. It’s a subtle and great way to celebrate your fandom.

Jedis are true heroes, able to master a craft and become one with the Force. Being admitted into the Jedi Order is a great honor and now you can be one step closer with these Jedi Order earrings. Show off who you truly are with either a silver or a gold pair.

R2-D2 is one of the most helpful heroes of the Rebel Alliance and now he’s here to help out again! These are just geek-chic cufflinks that can be worn even at the fanciest of events, but they also have 2GB USB drives in each of the cufflinks! So now you can help take down the Empire, even while at that popular gala.