Toy of the Week Podcast: Go Team Venture!: The Art and Making of the Venture Bros. 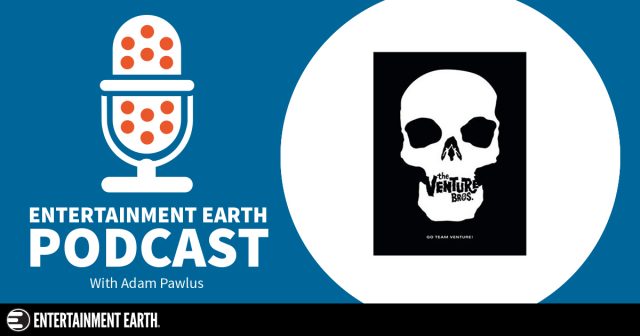 It may be a toy podcast, but this week we’re looking at a book – but not just any book. Nope, this week Adam Pawlus checks out the sensational Go Team Venture!: The Art and Making of the Venture Bros. As arguably one of the most-loved Adult Swim shows of all time, this book offers an inside look at the art, stories, and ideas that helped inspire the series.

With great nods to pop culture icons like Race Bannon, the Six Million Dollar Man, and the Monarch (who’s easily one of the greatest cartoon villains of all time), the Venture Bros. has assembled a cadre of cool characters. Whether you’re an 80s kid or an 80s kid at heart, the nostalgia factor is powerful.

The artwork here is nothing short of spectacular. With original pencil drawings, doodles on the back of napkins, lavish paintings, and more, there’s a ton of different ideas and styles throughout. There’s even a “How to Draw the Characters” guide in the form a comic within the book! And not to toot our own horn, but it even includes some of the merch the team here at Entertainment Earth even worked on.

With great origin stories, retrospective looks at older projects (a la The Tick), and more, this book is basically the Holy Grail for Venture fans. And while the book focuses mainly on seasons one through six, it does touch a tad on season seven.

To hear more about the Venture Bros book, and to hear some of Adam’s inside stories, be sure to have a listen to the latest Toy of the Week Podcast below.