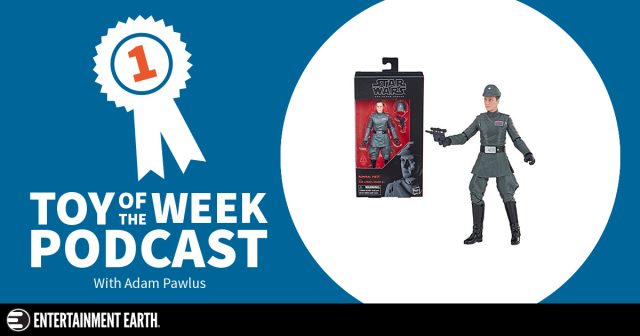 Piett, please! This online exclusive is a knockout.

Did you know that the actor who played Admiral Piett was the only Imperial officer to appear in both The Empire Strikes Back and Return of the Jedi? As one of the most hated (or loved, depending on how you feel about the Galactic Empire) characters in the Star Wars canon, this guy’s finally getting his own exclusive.

That’s right! This week Adam takes a look at the latest Admiral Piett 6-inch figure. As an online exclusive, this guy comes in the patented black-and-red box and features a removable hat and a blaster, which may actually be an entirely new design. While the lower body is taken directly from Grand Moff Tarkin, the upper torso, hands, and head are entirely new sculpts.

And in proper Black Series style, the likeness is spot on. Featuring a highly detailed head sculpt, fine line work, and tons of poseability, this figure is proof positive that the Star Wars line has come a long way. In fact, Piett here sports roughly 26 points of articulation, putting him on par with the latest Tarkin release – only this one ditches the droid for a cool hat and blaster.

As an online shared exclusive, Piett is only available at specific retailers. And because he wasn’t mass produced, he may not be available for long. To learn more about this awesome admiral, be sure to have a listen to the latest Toy of the Week Podcast below.