“You know, seeing you sure brings back a few things.”

It’s Friday, which means it’s time for another ToW Podcast. This week, Adam takes a gander at the hot new Star Wars The Black Series Wave 16 Case. This set features eight individually packaged figures (four of which come with entirely new decos), with tons of accessories and unique features.

Young Han comes rockin’ his iconic blaster that’s able to fit snuggly into his holster. He’s also sporting some great articulation, including ankle rockers, moveable elbows, and knees that are able to bend more than 90 degrees (something other Star Wars figures simply can’t pull off).

That said, the standout figure of this set is easily young Lando Calrissian. Adam can’t help but gush over the intricate little details (including the removable scarf, cape, and barrel silencer) and who can blame him? With so much swagger squeezed into a 6-inch figure, Lando’s a treat. In fact, it’s arguably one of the best figures Hasbro has ever made.

Grand Moff Tarkin is another stand out in this set, and with the figure’s impeccable likeness to the late actor Peter Cushing, he’s definitely one of the most exciting figures of the entire series. His torture droid (which is also included), is another cool addition and only helps make this wave even better.

To hear more about this set, be sure to have a listen to the latest Toy of the Week Podcast below. Till next week! 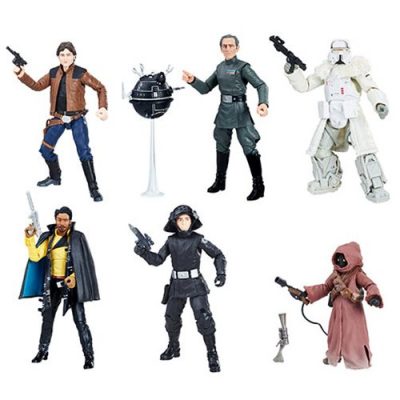