Toy of the Week Podcast: Transformers Generations Power of the Primes Deluxe Wave 2

Two Dinobots, a Terrorcon, a new Darkwing redeco, and the first non-exclusive Moonracer figure ever. Yes, this is one awesome Power of the Primes collection.

Welcome back, folks! This week Adam Pawlus takes a look at the Transformers Generations Power of the Primes Deluxe Wave 2 set. These figures just ooze ’80s nostalgia. Each toy features a unique robot and alt-mode, as well as a newly designed combining feature. (Yup, even the Dinobots combine.) Each figure also comes with their own weapon and collector’s card.

It may have taken 30+ years, but we finally have a Moonracer figure. First appearing way back in the ’80s cartoon, she’s one of a handful of fan-favorite characters who’ve been absent from the toy line. For shame! Luckily, Moonracer’s finally here and the wait was totally worth it.

Sludge, like his classic G1 counterpart, turns into a bumbling brontosaurus and is easily one of the best figures in this set. Snarl, on the other hand, turns into a red-eyed stegosaurus and comes with his own sword. He’s a bit bulkier than his teammates, but for his character model, it actually works.

And moving on to the Decepticons, we have Blackwing, who’s essentially a remold of Darkwing, and Rippersnapper, who’s part of the dastardly Decepticon faction known as the Terrorcons. Simply put, this figure is amazing. Tons of painted details coupled with insane articulation (including fully moveable wrists, legs, and tail in shark mode), make Rippersnapper an easy standout. Plus, who doesn’t like land sharks?

To hear more about these awesome Transformers, be sure to have a listen to the latest Toy of the Week Podcast below. 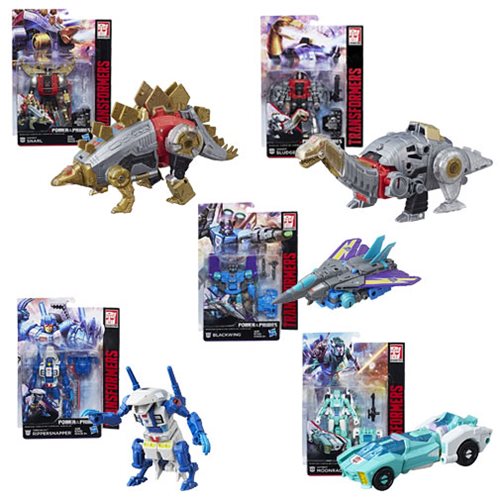 Action Figures Collectibles Entertainment Podcasts
Related ItemsAutobotsDecepticonsPower of the PrimesToy of the Week PodcastTransformers
← Previous Story Geek Headlines: Jurassic World Games, Avengers: Infinity War Trailer, and More!
Next Story → Do We Have to Grow Up Now? Life After Toys “R” Us