Looks like Ant-Man is getting the Gentle Giant Animated statue treatment. As Marvel’s tiniest superhero, this new statue is based on Marvel’s Astonishing Ant-Man #001 cover. Of course, some liberties were taken, including giving Scott Lang a makeover to look a little less superhero-y and a little more…gentle?

As the 16th release in the popular Marvel line, each statue is hand-cast, hand-printed, and comes with their own certificate of authenticity. Details are still forthcoming, so be sure to check Entertainment Earth’s Gentle Giant section later.

In true Figuarts fashion, each character will come with a gaggle of accessories, including extra faces, weapons, etc. And as an added bonus, the U.S. releases will also be coming with exclusive stands and effects. It’s a great time to be a Marvel fan. 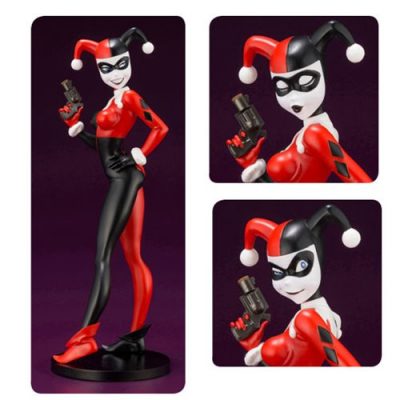 As one of the greatest DC cartoons ever created, Batman: The Animated Series has turned a cult following over the years. Now, Kotobukiya U.S. has teased two new awesome ARTFX+ Statues. Harley Quinn and Joker are based on the 90s animation models and look every bit as good today as they did some 25 years ago.

Joker comes holding his signature machine gun while Harley Quinn is posed flashing a diabolical smile with a pistol in hand. Both figures come with interchangeable bonus faces and stand over six inches tall.

The ever-expanding line of DC and Marvel statues continues with these awesome additions. Featuring Wolverine, Superman, Deadpool, Joker, and more, these statues are extremely detailed representations of your favorite superheroes. Seriously, just look at how menacing this Joker statue is.

The original Ghostbusters lineup comes to life in the epic One:12 Collective Deluxe Box Set from Mezco Toys. This set includes Venkman, Ray, Egon, Winston, and even Slimer. Each character comes with a ton of extras, including bonus faces, interchangeable hands, and more.

The figures also come with their own light-up proton pack (because what good’s a Ghostbuster without the pack?), and sport an impressive 28 points of articulation.