This week saw even more new statues and action figures from John Wick 2, The Walking Dead, Batman, and more!

Straight from the hit shoot-em-up sequel, this John Wick 2 statue features John as he’s walking away from the infamous hit job in Rome. Those who’ve already seen the film know exactly what this means. For those who haven’t, well, you’re definitely missing out. As the debut release in the new Gallery PVC diorama line, this statue’s already receiving tons of hype. At roughly 9-inches tall, it comes packaged in a full-color box and is sure to look great on any shelf. Whatever you do, just remember not to mess with his dog.

Ditching his iconic crossbow for a decked-out rocket launcher, this Daryl Dixon figure is armed to the teeth and ready for an all-out war. Sporting an incredible likeness to his on-screen character, this upcoming Walking Dead figure stands roughly 10-inches tall and sports a mean grimace. He also comes with his own circular base and unique window-themed package.

Based on the seminal Batmanga series from the 60s, this gorgeous black-and-white Batman statue was sculpted after Jiro Kuwata’s legendary design and captures the perfect balance between earlier incarnations of the caped crusader and the newer Dark Knight-era version. With a beautiful display stand, intricate cape, and unique accessories, this statue is limited to only 5,000 pieces and is expected to sell like hotcakes. Pre-orders are still available, which means you’ll want to lock yours in fast.

DC Essentials is back with this highly detailed (and highly poseable) action figure set. The upcoming two-pack features Shazam and Black Adam in all their caped and gold-lined glory. Each figure stands 7-inches tall and comes with their own window box. The release date is scheduled for February 2019, but you can lock in your pre-orders today.

It looks like we finally found Carmen Sandiego – she was hanging out in the back room with all the other Pop! Vinyl figures. Carmen here comes with her own display box and measures roughly 3 3/4-inches tall. Complete with her radical red outfit and classic black gloves, you’ll never have to worry about losing Carmen again.

Lady Luck is getting a brand new statue with Marvel’s Premier Collection. Modeled after her classic comic book appearance, this 12-inch Domino statue comes with her own full colored box and certificate of authenticity. Even better, the statue is able to connect to the recent Deadpool and Cable statues to help complete your diorama. TL; DR: If you already have Cable and Deadpool, you’re gonna want to get Domino too. 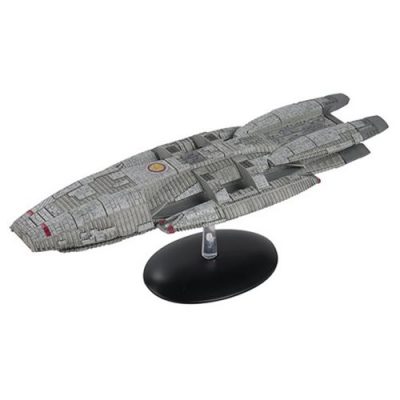 From the makers of the Star Trek: The Official Starships Collection comes this epic new Battlestar Galactica ship. It’s no stretch to say Battlestar fans have long been overlooked when it comes to new releases, and this beautiful die-cast model is sure to scratch that itch. Measuring roughly 8- to 11-inches long, this ship is number three in the collection and comes with its own accompanying magazine profile.