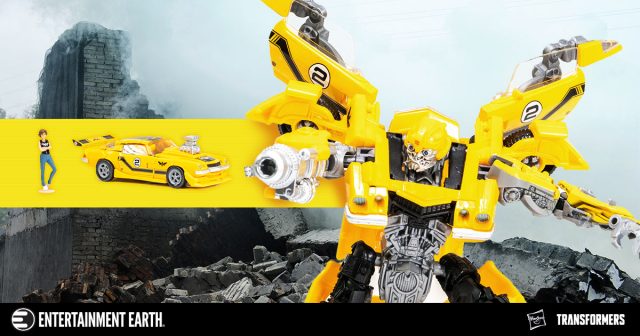 Bumblebee is back and he’s better than ever. As lucky number 15 in the Studio Series line, Bumblebee here comes sporting his flashy ’77 Camaro and features a highly intuitive transformation. While this is definitely a mold we’ve seen before, this Bee features a few subtle accent differences and a handful of bonus parts you can actually use to pimp his car out. With an extra bumper, side fenders, and two new hood options, you can essentially deck Bee out any way you see fit. Oh, and his trusty friend Charlie is here too.

Because this release features more add-ons, the box is significantly bigger. It also features a great backdrop (a common theme among Studio Series releases) and includes a new sticker sheet with two different sets of decals. Meaning you can customize Bumblebee however you like. This is also one of the few TFs to come with a female mini figure. While Charlie is basically just a static statue, she looks great next to Bumblebee, and even sports a nice little bee logo on her shirt. As the Studio Series line is all about scale, it’s definitely cool to see just how Charlie stacks up alongside all the other Autobots.

While it can be hard to find a middle ground between the older designs and the newer CGI-era models, Hasbro’s Studio Series line is essentially a culmination of the two; blending elements of the Bay-era designs with a hyper-realistic alt mode, the result is a new line of figures that aren’t quite Masterpiece, aren’t quite CHUG, but are uniquely and entirely screen accurate.

As one of the most loved and venerated characters in the TF universe, Bumblebee has had his fair share of incarnations. Often portrayed as the unspoken heart and soul of the Autobots, what Bumblebee lacks in size he makes up for in courage. Bee and Charlie are expected to be released soon, and you can order your copy today at Entertainment Earth.