Watch Out or Death and His Crow Will Reap Your Soul 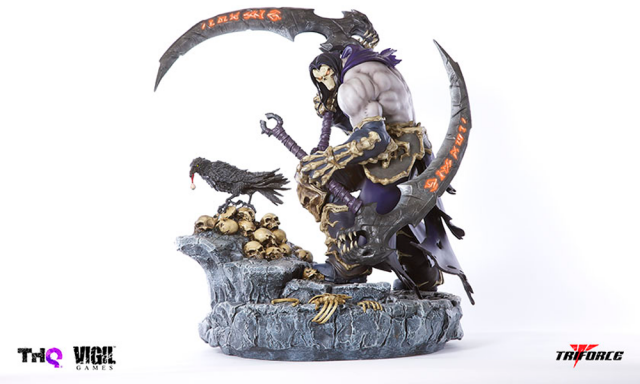 Death and Dust. What more could you ask for? Well, maybe the Darksiders II Death and Dust Premier Scale Soul Reaper Edition Statue from TriForce.

This officially licensed statue showcases the terrifying force that everything fears but nothing can escape. Masterfully sculpted and painted, the muscled Death hunches over as he steps across a threshold of littered skulls. With dual scythes, he glares out of his macabre face. His raven companion perches atop a skull, an eyeball dangling from its beak.

In the game, Death bears the greatest burden of guilt for the near extinction of his race. Donning his iconic mask to represent his role as executioner on the day he slaughtered his brethren, he has not removed it since the Four Horsemen of the Apocalypse were granted a reprieve from their condemnation.

Both versions of the Death and Dust statues are currently available for pre-order with free shipping at Entertainment Earth.

Collectibles Statues
Related ItemsDarksidersDarksiders IIDeathDeath and DustProject TriForceSoul ReaperTriForce
← Previous Story Wonder Woman Can Do It with Exclusive Bombshell Morphing Mug
Next Story → Wrap This Scarf Around You, Grab a Jelly Baby, and Get Ready to Time Travel