Collecting The Twilight Zone: Highlights from a Land of Things and Ideas 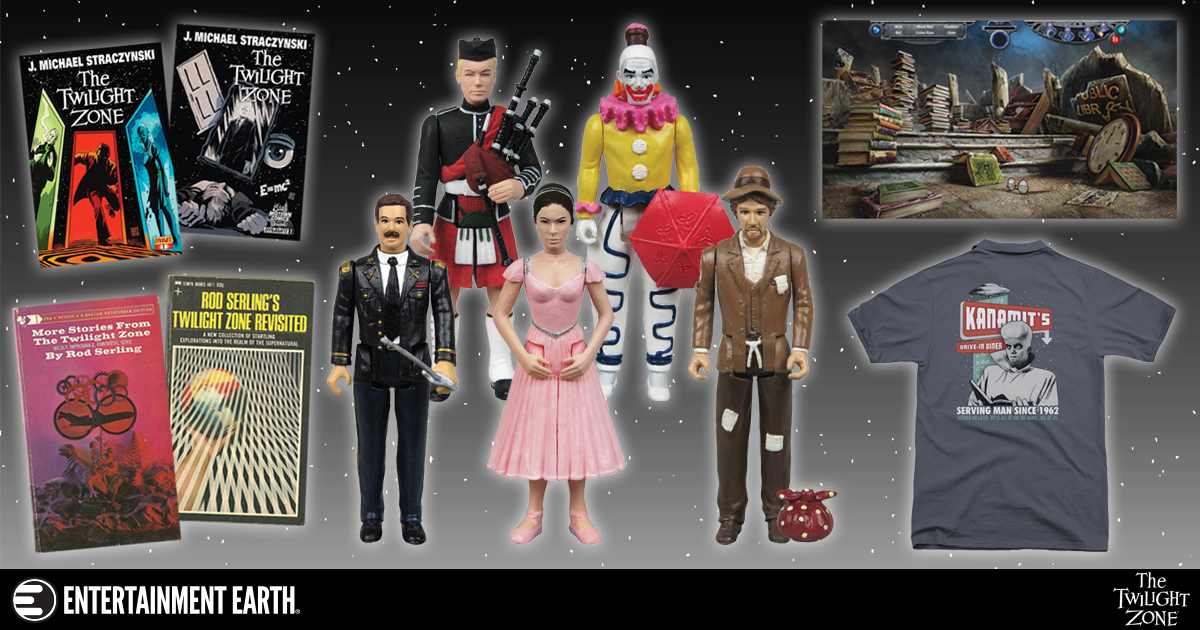 With no fixed settings, recurring characters, or continuing storylines, an anthology TV series like The Twilight Zone might not seem to hold much merchandising potential. Then again, there’s never been another anthology series that has quite matched The Twilight Zone‘s power to haunt viewers’ imaginations – and, very often, hearts and moral consciences – long after the last pulsing, penetrating notes of its immediately recognizable theme song have faded away.

On this Twilight Zone Day, take a brief tour with us of some collectible artifacts from “the middle ground between light and shadow, between science and superstition.” Our next stop – The Twilight Zone!

“A Lifelike Creation of Plastic and Springs and Painted Smile”: Action Figures, Bobbleheads, and More from The Twilight Zone

Rod Serling’s description of the murderous doll Talky Tina (you’d better be nice to her!) could also apply to The Twilight Zone action figures and bobbleheads from Bif Bang Pow!, a significantly less lethal line of toys.

Celebrating the series’ place in our pop culture pantheon, Bif Bang Pow! has brought many of Serling’s and his writers’ most memorable characters to toy collectors’ hands and shelves, in both their original black-and-white hues and in “colorized” versions.

If figures aren’t your forte, Entertainment Earth still has you covered – literally! To that end, cover the doors in your house with this press-on portal to another dimension:

You might also turn heads with any of Trevco’s Twilight Zone polo shirts, perfect for the person who wants to be supernatural yet stylish.

“You, Mr. Bemis, Are a Reader!”: The Twilight Zone on the Page

Not even Henry Bemis could ever find time enough at last to read all the books, comic books, and magazines The Twilight Zone has inspired.

Given Rod Serling’s passion and talent for the written word, it’s fitting that books were the earliest Twilight Zone merchandise. Serling wrote an impressive 92 of The Twilight Zone‘s 156 episodes – nearly 59% of the entire series – and adapted 19 of his scripts as short stories, which were published in three paperback volumes from 1960-62. The stories remain in print today.

Readers who couldn’t get enough The Twilight Zone could also turn to comic books. Gold Key published an ongoing The Twilight Zone series from 1962-79. Some of the famous writers and artists who filled its 91 issues with all-new stories included Len Wein, Walt Simonson, Alex Toth – and, in his first professional comic art job, Frank Miller.

Today, Dynamite holds The Twilight Zone comics license. In 2014 it launched a new series with a story penned by J. Michael Straczynski (among whose credits are 10 of the 30 Twilight Zone revival episodes produced for first-run syndication in 1988). Dynamite’s most recent Zone issue appeared last February; it’s a story set in 1959, the year The Twilight Zone made its debut.

But the series’ most significant literary legacy may be Rod Serling’s The Twilight Zone Magazine. From 1981-89, it nourished nostalgia for the series by offering behind-the-scenes information as well as script reprints. (I read “And When the Sky Was Opened” in the May/June 1985 issue long before I saw it, and it’s still one of my favorites.) But just as important, the magazine was one of the decade’s best markets for short horror, dark sf, and “weird” fiction. Authors who appeared in its pages, with both brand-new and reprinted stories, included Stephen King, Harlan Ellison, Peter Straub, Connie Willis, and Lois McMaster Bujold.

According to IMDB, when Rod Serling’s widow Carol appears in a cameo (one of John Lithgow’s fellow airplane passengers) in 1983’s Twilight Zone: The Movie, she’s clutching an issue of The Twilight Zone magazine.

“I’d Give Anything to Play Him One Game!”: The Twilight Zone Games

Looks like no enterprising billiards manufacturer has yet brought out a Twilight Zone pool table around which fans can pretend to be Jesse Cardiff or Fats Brown! But the series has seen some gamification over the years.

Ideal Toy Company published The Twilight Zone board game in 1964. Rather than using any specific episodes for inspiration, the game riffs on some of Serling’s opening narration: “You’re traveling through another dimension….” So, players move tokens along the “Road to Reality,” which runs across what the rules inside the box top call an “Exciting Game Board” (that’s wishful marketing copy). They try to block each other’s progress with “Closed Door” cards while avoiding their own detours into the Twilight Zone, side trips forced upon them when the “Colorful Spinner” lands on an eye symbol.

Frankly, the game doesn’t sound like much fun, but I give Ideal points for clever use of the TV series’ indelible iconography and credit for going high concept. After all, how many board games can boast that the winner is the one who keeps everyone else from reaching reality?

In 1988, The Twilight Zone crossed over into the realm of digital shadows and substance when Gigabit Systems published a text-based “thriller” for PC with graphics that are crude by today’s standards but attempt some ambitiously detailed scenes, some of which include “Easter eggs” nodding to the source material. For instance, consider this signpost up ahead…

Players entered simple verb-object commands and used directional keys to wander through a mystery story, solve puzzles, and flee grim deaths reminiscent of the old “Choose Your Own Adventure” books.

The few online reviews of this game I found aren’t terribly kind to it. Hey, not even Serling hit a home run with every episode. (“Cavender is Coming” or “The Bard,” anyone?)

An upgrade from the previous games, Legacy Games’ The Twilight Zone, from 2014, has gorgeous graphics. They immerse you in the settings of 15 famous episodes – from the plane cruising at 20,000 feet with a gremlin on its wing to the well-manicured but doomed lawns of monster-filled Maple Street – and bring you face to face with 30 classic characters, including bespectacled Henry Bemis and the Kanamit ambassador to Earth (don’t let him offer to serve you).

By all accounts, the best The Twilight Zone game wasn’t a board or video game, but Midway’s 1993 widebody pinball machine. Enthusiasts and collectors have long hailed it as a triumph of design and gameplay. It holds the #1 spot on the Internet Pinball Machine Database’s list of the top 300 rated electronic machines. With fast-paced ball play on a lovingly themed field full of carefully curated references to The Twilight Zone episodes and characters, it’s easy to see why this machine still wins acclaim.

Just watch the last 3 minutes of this vintage promotional video to see the machine’s many fabulous features in action:

Online reviewers gush over this game. Comments like “all time classic” and “near perfect” dominate message boards. Midway submitted a bold machine for arcade gamers’ and The Twilight Zone fans’ approval – and got it!

At nearly 60 years old, The Twilight Zone shows no signs of fading away. Its focus on ordinary people in extraordinary circumstances is too compelling. Its incisive stories hold our feet to the fire on questions of morality, without ever denying the human capacity for decency and, on occasion, nobility. Plus, it’s just too much well-written, well-acted, and fun to forget!

And if viewers keep following the signposts to that “wondrous land whose boundaries are that of imagination,” there will be no shortage of collectibles commemorating the journey!

What’s your favorite collectible from The Twilight Zone? Submit it for our approval in the comments section below!