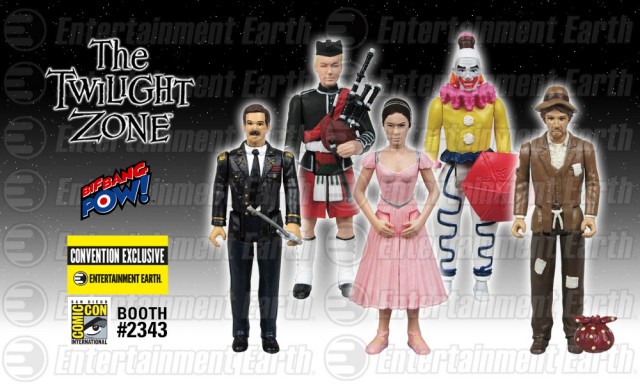 A Ballet Dancer, a Bagpiper, a Hobo, a Clown, and an Army Major all walk into a dark pit… and end up as a convention exclusive at the Entertainment Earth booth #2343.

Bif Bang Pow! continues their very popular The Twilight Zone 3 ¾-inch action figure line with the highly anticipated The Twilight Zone Five Characters in Search of an Exit 3 3/4 Action Figures In Color – Convention Exclusive. Now collectors can own the toys that didn’t know they are toys! Inspired by the classic episode “Five Characters in Search of an Exit” from Season 3 of The Twilight Zone, the set includes the Ballet Dancer, Bagpiper with bagpipes, Hobo with bag, Clown with umbrella, and the Army Major with sword. Each 3 ¾-inch action figure has five points of articulation and is re-imagined in color! As an added bonus, the figures come packaged in a special stacked ladder formation inspired by the well-known scene from the episode! At only 600 sets, this individually numbered limited edition may disappear to another dimension soon.

Not attending San Diego Comic-Con 2015? *PRE-ORDER your The Twilight Zone Five Characters in Search of an Exit 3 3/4-Inch Figures Set of 5 In Color – Convention Exclusive at Entertainment Earth now!

See more of our The Twilight Zone collectibles here!