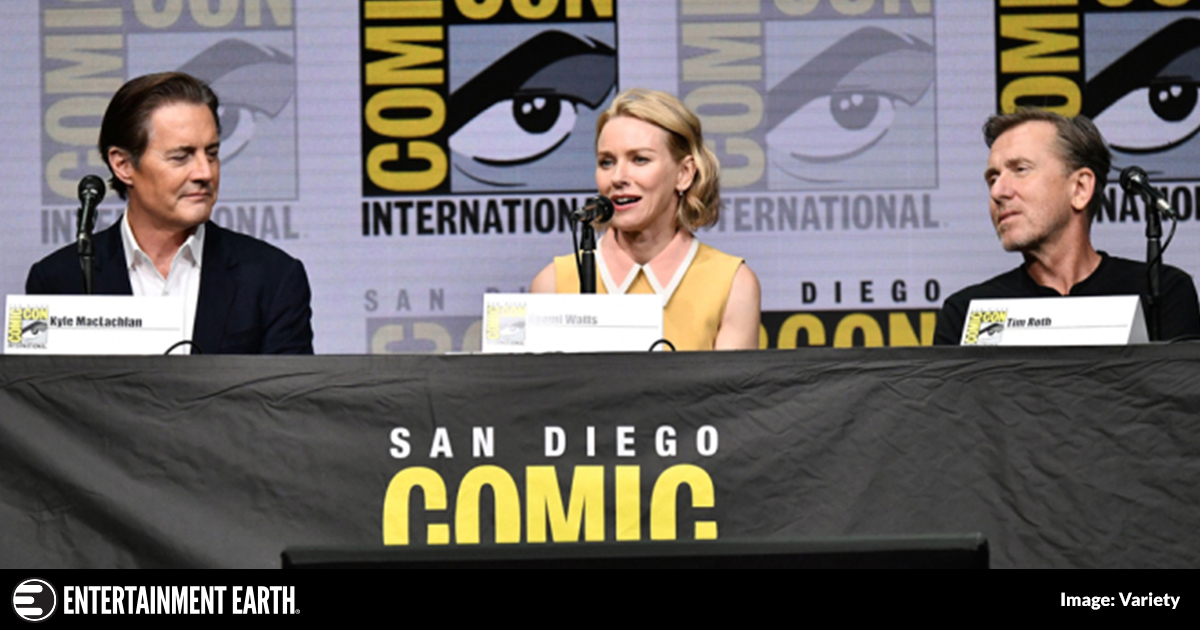 It may have been over twenty years since we last saw Agent Dale Cooper and company in the bizarre, secretive town of Twin Peaks, but what is time but an ultimately meaningless human construct? In true Lynchian fashion, the return of the award-winning television series TWIN PEAKS on SHOWTIME® proves that some things remain as inscrutable and odd as ever.

The cast of the return were all smiles at their SDCC table as they sang creator/writer/director David Lynch’s praises. The returning crew and new faces alike had nothing but nice things to say about an auteur long regarded as one of the strangest voices in television and film.

“He’s an artist, a real artist, and that’s untouchable,” said star and longtime collaborator Kyle McLachlan (Dale Cooper). “He followed this dream in his mind and I find that inspiring in my own life.”

There’s no denying that Lynch knows exactly what he wants – even if no one else does. The stars of the show admitted they’re often confused and surprised by the scripts, too, and frequently leave the set asking the same questions the fans at home have.

For the actors, that strangeness and unpredictability make for some challenging work. “In his world, you get two takes, so you want to be really good really fast,” explained Matthew Lillard, who plays a new character, William Hastings.

But would they ever say no to Lynch? “When David calls, we answer the call,” said McLachlan. The visionary director’s reputation is such that even folks like Tim Roth, who never saw the original series, were eager to sign on for the return.

Amidst all the praise at the panel was a special video message from Lynch himself, who seemed to be caught up in a series of dramatic accidents off-screen – his message was frequently interrupted by the sounds of falling elevators, crashing cars, and sundry other tragedies before cutting off into mysterious static.

It’s that sort of enigmatic intrigue that made TWIN PEAKS such an underground smash and inspired numerous TV and filmmakers in the years that followed. Panel moderator Damon Lindelof is known for several popular projects but first came to prominence with LOST, another mystery wrapped in an enigma wrapped in a puzzle that dazzled audiences for several seasons.

We never would have had that island-set drama rife with polar bears, conspiracies, and mystic prophecies if it hadn’t been for the inspiring force of Lynch and TWIN PEAKS, as Lindelof explained: “I owe my entire career to this show.”

“I am humbled,” said Lillard in a video for fans posted on Twitter. “Because of the legendary sort of status of this cast, and working with somebody as remarkable – truly one of America’s greatest artists – as David Lynch.”

As a fan, there’s nothing better than getting confirmation that the cast and crew love the show as much as you do – and love the fans back just as much. James Marshall (James Hurley) was all smiles as he thanked the “7,000 fans” that packed Hall H for the panel, while producer Sabrina Sutherland warned those lucky enough to preview Episode 11 to not spoil the surprises for everyone else.

The panel wasn’t the only treat for fans – Entertainment Earth also had the cast for an exclusive signing at booth #2343. A lucky few got to momentarily rub elbows with McLachlan, Lillard, Marshall, Roth, Naomi Watts, and others, securing a bevy of autographs on their DVDs, and TWIN PEAKS merchandise while debating the merits of apple pie and damn fine coffee.

If this year’s SDCC proved anything, it’s that true fans are diehard and even a show that ran for a mere two seasons over twenty years ago can still make crazy waves – just by being crazier than everything else.