Whodunit? Find Out Now with Game of Thrones and Harry Potter Editions of Clue!

Given the amount of courtly intrigue unfolding in the Game of Thrones world, this series-themed edition of Clue has been a long time coming. And this time, you get to choose between two mysteries!

The Game of Thrones Clue features a double-sided game board; players choose to solve the murder mystery in either the Red Keep or in Meereen. Who was responsible for plotting the murder? What weapon was used and where did the crime occur?

Also included are 21 Intrigue Cards, featuring 13 Master of Whisperers and 8 White Walkers! For 2-6 players, ages 18 and up.

Or, if you’re looking for something a little less bloody and a little more family friendly, there’s always the Harry Potter Clue .

It seems a fellow student at Hogwarts School of Witchcraft and Wizardry has vanished, and it’s up to you to get to the bottom of the disappearance. Playing as Harry, Ron, Hermione, Ginny, Luna, or Neville, you must discover who did it, what spell or item they used, and where the student was attacked.

Move around Hogwarts making your guesses, but watch out! Just as the halls of Hogwarts like to rearrange themselves, wheels on the board will keep changing to reveal secret passages, moving staircases, or even the Dark Mark!

Protection from the Dark Mark comes from the spells, allies, and items provided by the Help Cards. When you’re sure you’ve got the facts straight, head for Dumbledore’s office and make your accusation to win the game. For 2-4 players, ages 11 and up.

Each edition of this classic mystery game is sure to go fast, so pre-order now! 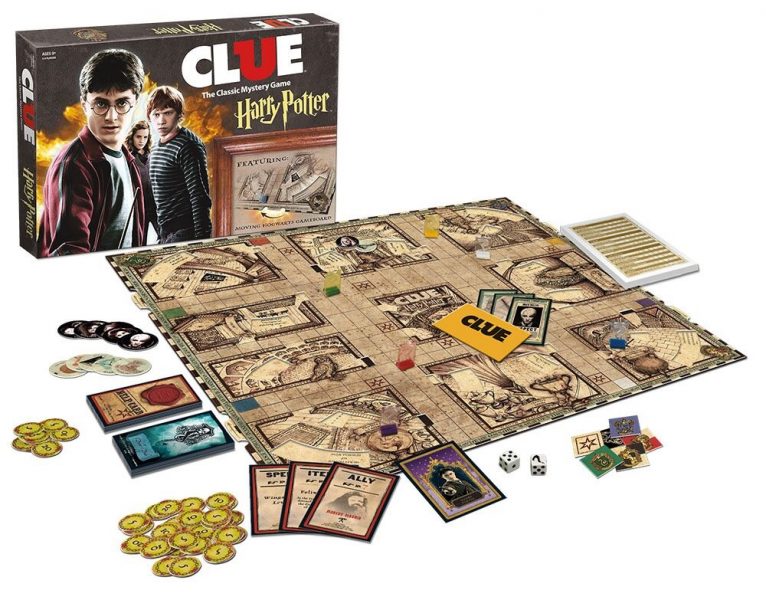