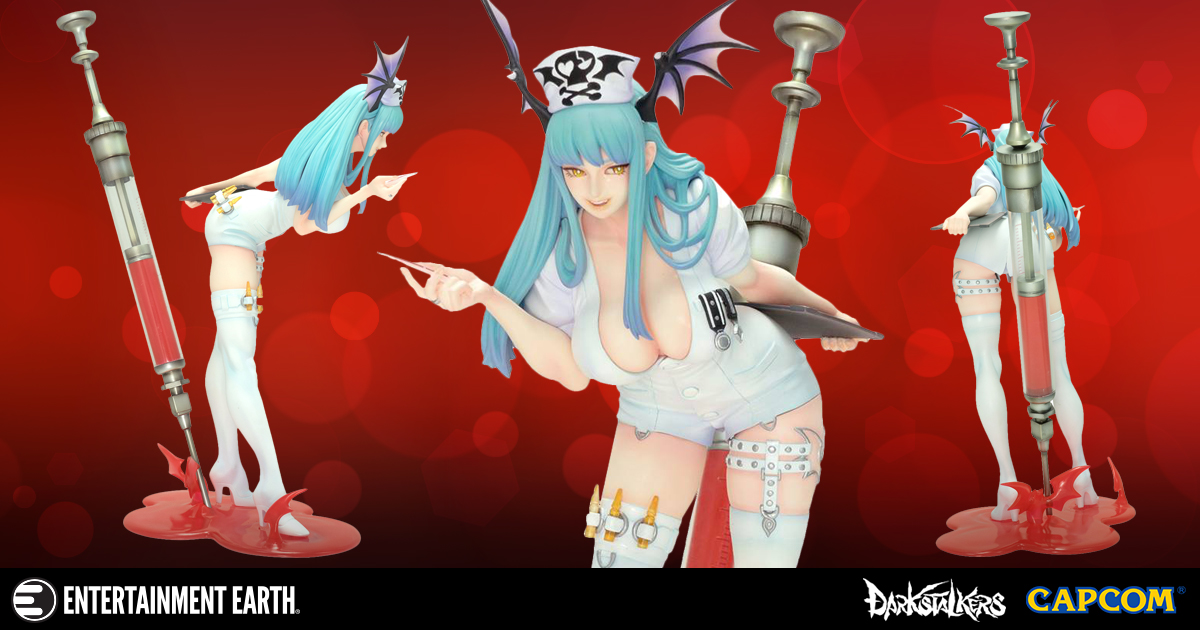 Who doesn’t love a sexy anime nurse? Especially a vampire one?

The Darkstalkers games are fighting games filled with an anime style that lends itself to everything Ionove in one platform. Of course, my favorite character turned out to be Morrigan with her bat wings that extend to act as daggers against her enemy and her little bat friends that give her fighting style a flair only a succubus could accomplish. It’s no wonder this Darkstalkers Vampire Morrigan CFB Creators Model Nurse Statue sparked my interest. It has a style straight from the game with an added bonus of details that bring her look over the top.

Looking at the figure I was rather taken aback by how much I liked her nurse’s costume. It reminds me of a store-bought Halloween costume with a slight twist of adding bat wings and a skull and crossbones to her white hat. It helps to make the rest of the figure’s details pop without focusing too much on her other large attributes. In particular, the small syringes attached to her right leg and the bat-shaped garter belt on her left really start to bring this story of her playing doctor together. She’s also holding a pen one hand and a clipboard in the other completing a storyline that she’s about to give a much needed shot to a most likely unsuspecting patient.

That twisted smiling face confirms her sinister plans in my head making this an all-encompassing statue that shapes it’s own story whether you are a fan of the Darkstalkers franchise or not. She’s also framed by an over-sized syringe filled with red blood liquid dripping to the floor where she stands. It’s the tiny bats popping out from the blood that bring this back into a more fun anime style that fans of all kinds will definitely appreciate from this statue.

Coming out in June 2018, Morrigan is available for order now and customers within the U.S. will be able to receive free shipping. She’s an impressive statue standing about 12 1/4-inches tall and sculpted to tease as she bends over to make sure her patient is ready for what she has in store next. Be careful not to get caught by this sultry temptress by making sure to add her to your team and collection today!