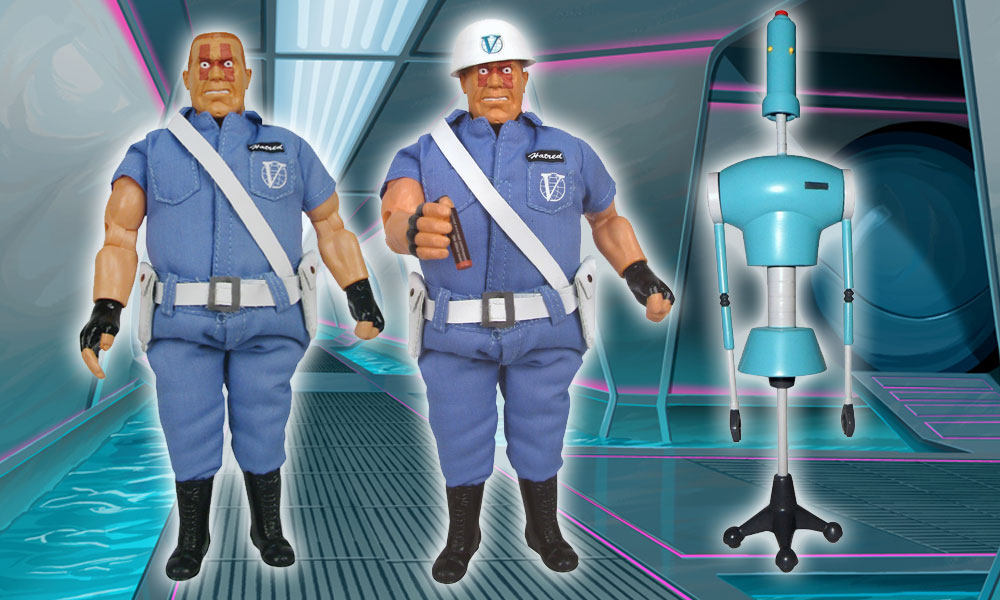 This is the action figure you love to hate. Here’s Sgt. Hatred in his blue fabric outfit (with nametag and logo), complete with vinyl gun belt, strap, and boots. He also comes with a removable helmet, gun, and cigar accessories. And how could you forget an abundance of attitude! Check out the “H” symbol on his face, too. What more could you ask for?

Devoted fans of The Venture Bros. will recognize H.E.L.P.eR. (Humanoid Electric Lab Partner Robot) from the series. In cool-gray and blue, he features wheels and multiple points of articulation at the neck, shoulders, elbows, and waist. He also sports a removable head, arms, and torso… in preparation for future interchangeable parts! Couldn’t you use a personal helper robot? H.E.L.P.eR. does not include fabric clothing.

You’ll find the most popular and recognizable characters from the show faithfully represented in real fabric clothing and a 1970s retro style that accurately portrays that distinctive action-comedy mix that has become synonymous with the TV series! Each figure comes individually carded in blister packaging.

The Venture Bros. is an animated television series airing on Adult Swim. The action-adventure series mixes comedy and drama while focusing on the life and adventures of the Venture family. Co-created by Jackson Publick (Chris McCulloch) and Doc Hammer, the animated series currently has five seasons and has received critical acclaim throughout its life.

This amazing collectible is currently available for pre-order and is scheduled to arrive in December 2014.