This Warchief Is Ready to Enter the Nexus!

Thrall, son of Durotan, was once the Warchief of the almighty Horde and for many World of Warcraft players, he will always be our Warchief.

Thanks to Heroes of the Storm, players can now play as their favorite Warchief and wield the Doomhammer! Everyone has the ability to play alongside, or against, some of Blizzard’s most famous heroes. The enormously famous M.O.B.A. (multiplayer online battle arena) game includes characters from World of Warcraft, Diablo, StarCraft, Overwatch, and even The Lost Vikings.

The Heroes of the Storm Thrall Action Figure by NECA perfectly captures the Earth-Warder Shaman. Thrall was sculpted in partnership with Blizzard to accurately portray his standard skin. From shoulder to toe is his heavily armored with no attention to detail spared. Beneath his massive armor, he wears chain mail pants and his fur-lined leather boots and gloves. He rocks his signature hairstyle with two long braids that go down to about his knees and a high ponytail. Of course… no Thrall figure would be complete without the Doomhammer and this one does not let us down! The leader of the Orcs measures about 6 1/2-inches tall and has over 25 points of articulation.

Pre-order this Thrall action figure before it rides off into the sunset… on top of a dinosaur… on top of a shark… with rockets! J.K. we will save that for the undead rockers of the world. 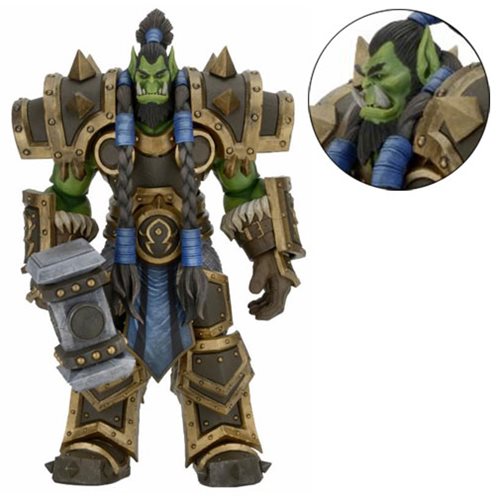