Oompa Loompa Doopity-Do, Pop! Has Some Willy Wonka Figures For You!

Continuing their march toward total global domination, Pop! has released another nostalgic line of vinyl figures — this time, it’s a certain world-famous chocolatier and a passel of naughty children.

One of Wonka’s unusual helpers, an Oompa Loompa, is awaiting orders. Not many can pull off the orange skin and green hair — plus white eyebrows — but this little guy nails it.

Entertainment-obsessed Mike Teevee is dressed in his cowboy gear, complete with holsters, but thankfully this version isn’t quite so loud or prone to complaining.

The gluttonous Augustus Gloop is bursting from his suit and liberally smeared with the latest piece of chocolate he’s snatched against Wonka’s advice.

The sweetest boy around, Charlie Bucket, is holding his fateful golden ticket, not yet aware of how much his life will change following a strange visit to a stranger chocolate factory.

And Grandpa Joe is prepared to chaperone Charlie on his tour, but the stolen Fizzy Lifting Drink he’s holding may prove disastrous…

Whether you’re longing to be whisked away to a world of pure imagination, a die-hard Gene Wilder fan, or just really into Roald Dahl, this line based on the 1971 classic is the golden ticket! Pre-order now at Entertainment Earth.

» see all charlie and the chocolate factory pop! vinyl figures 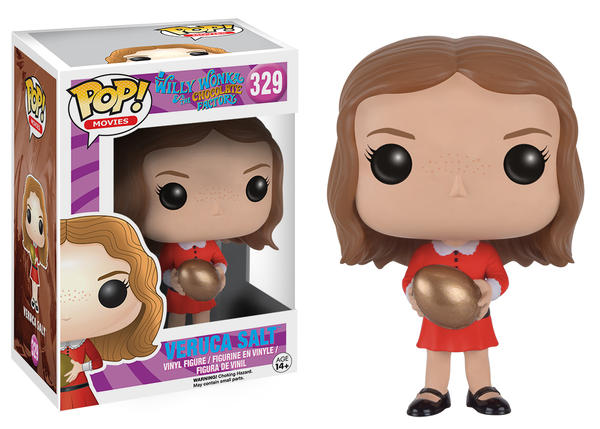