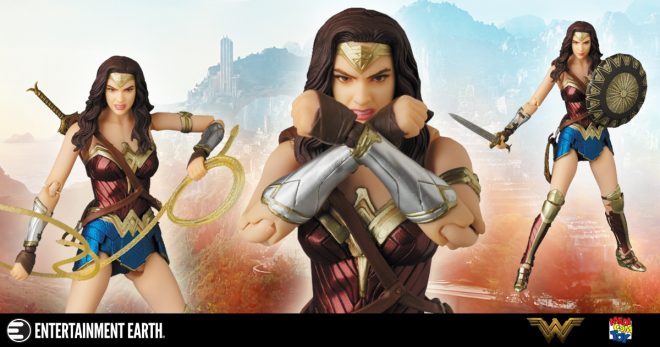 Gal Gadot may have made her debut as Wonder Woman in Batman v. Superman: Dawn of Justice (admit it, she was the best character in that movie), but she fully takes over the role from Lynda Carter when the DC Comics hero gets her own movie June 2, 2017 (not that Lynda Carter won’t always have a special place in fans’ hearts for her iconic portrayal of the warrior princess in the TV series from 1975 – 1979).

This life-like figure, based on the highly-anticipated film, is approximately 6-inches tall and comes with an articulated stand. Particular attention has been given to the figure’s detail and articulation. Two heads allow for different looks of the warrior princess as she stands ready for action holding her sword, shield or two different variations of her famous lasso of truth, all included as accessories.

Remember, Gal Gadot will also be playing the role in the Justice League movie, planned for November 2017. So get ready for Gal Gadot’s reign as Wonder Woman by pre-ordering the Wonder Woman Movie Action Figure from MAFEX coming in January 2018.