Diana Prince has been a hero to many the world over for decades, and for good reason. Wonder Woman has always had facets to her character while others remain one dimensional. She’s not simply a warrior, she’s also a healer capable of extraordinary empathy. Her time through the centuries may have made her colder in some areas, but even a modern day Diana has that kindness hidden under a tough exterior.

In June 2017, director Patty Jenkins brought that hero to the big screen in Wonder Woman. isn’t perfect, but so few films are, and at the end of the day Jenkins nailed who Diana is at her core. Her empathy is presented in spades even as she punches her way through the Germans to get to the nefarious Ares. She’s naive to man’s world but never depicted as dumb, and even if she doesn’t understand man’s laws, she understands what’s right.

In October of this year, you can take the princess of Themyscira home with you! Standing at about 10-inches tall, the new Play Arts Kai Wonder Woman Movie Action Figure has a ton of different bend points, and stunning detail throughout. From the toes of her boots to the tips of her hair, you can see highlights and shadow painted in deep detail. Wonder Woman has a number of accessories, including her sword, which can be held in her hand or mounted on her waist or shoulder.  She even comes in a windowed box for those who like to keep their figures sealed! 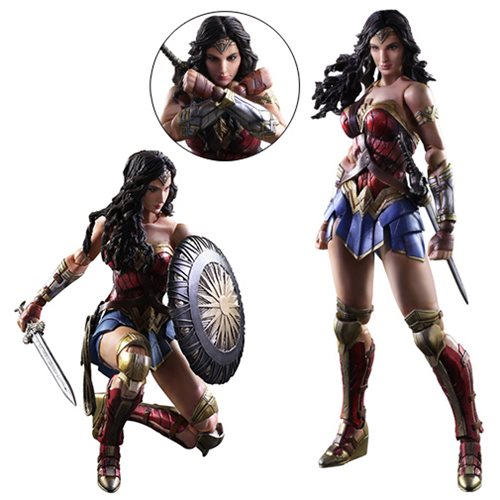