This Prop Replica Is a Must for Your Wonder Woman Collection 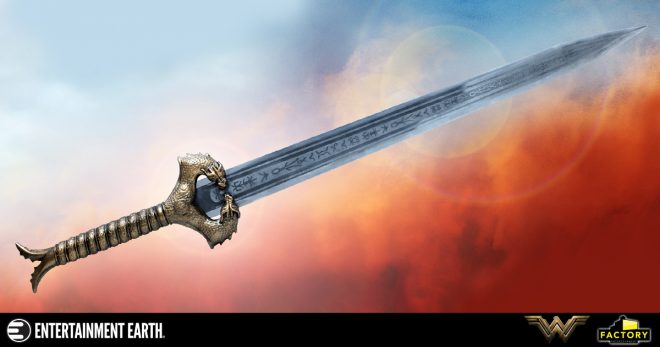 If you watched the Gal Godot Wonder Woman movie, then you knew the confrontation with Ares, the God of War, was coming.  And if Princess Diana was going to defeat him, she was going to need a special weapon. She may not have yet known when she received the sword forged by Zeus as a gift from the gods that, by the end of the film, she would be using it in a one-on-one battle against Ares that was about as epic as it gets. She just knew she had to have it.

And soon you can have it too – well, the next best thing. And, unlike Diana, you won’t have to climb a high tower on Themyscira to get it. The Wonder Woman Movie God Killer Sword Prop Replica from Factory Entertainment will be available in January 2018. Pre-order it now, though, and you will ensure timely delivery, as well as get free shipping.

This collector’s item is an exact duplicate of the prop sword used in the movie. The detail is immaculate, and at 30-inches long and 7-inches wide it includes a stainless steel blade that has been forged by hand. Features that make the sword an exact replica include Amazonian runic script on the fuller and a gold-colored metal alloy hilt. And, yes, those really are mirrored dragons you see biting into the blade. The reptilian armor around the handle helps complete an image of the dragons’ tails forming a ridged pommel.

A stand and numbered plaque allow you to display the sword proudly. It also comes with a certificate of authenticity and even a prop story booklet. Whether you are a fan of Wonder Woman through the Gal Gadot movie or DC comics, the Wonder Woman Sword is a must for your super hero collection. Collectibles Prop Replica
Related ItemsDCProp replicaSwordWonder Woman
← Previous Story Lightning McQueen at Your Command!
Next Story → He’s a Jedi, Like His Father before Him