At WonderCon Anaheim last weekend, Kotobukiya held a spring preview to showcase what’s in the works for their collectibles.

They started by breaking down the ArtFXJ line, which is a detailed statue line for characters trending in both Japan and America. The Cardcaptor Sakura ArtFXJ statues are due out in May or June, though release dates frequently shift. The Black Butler line will debut this year with Ciel Phantomhive, Sebastian Michaelis, and Grell Sutcliffe. Kotobukiya is also working with FUNimation for debut a statue for Tokyo Ghoul.

With regard to Star Wars, The Force Awakens is in the works but can’t be discussed (though we’re crossing our fingers for some announcements at Star Wars Celebration this month). The light-up lightsaber chopsticks are due at the end of April, including the new designs for Mace Windu and Yoda.

The Star Wars ArtFX+ line continues. At Star Wars Celebration, two exclusives will be available: R2-A2 and K-3PO are both a limited release of 1,500 pieces worldwide in 1:10 scale with a commemorative coin. The Luke and Leia ArtFX+ statues are due in May, and they complement the Han and Chewie ArtFX+ statues perfectly. Kotobukiya’s Snow Trooper 2-pack is due out in October of this year as 2 distinct figures with 3 available arm poses. Keep an eye out because they’ll be revealing the official sculpt at Star Wars Celebration.

Looking forward to 2016 means even more Star Wars. The ArtFX ESB Darth Vader will be 1:7 scale with light-up effects in the chest plate and potentially even sound. The ArtFX 1:10 scale line continues with Yoda and R2-D2 as seen on Dagobah, as well as an Obi-Wan Kenobi ArtFX.

The Halo line is particular interesting, because of the ArtFX+ Master Chief. It will be “a module type system with 10 articulation points on the arms, torso, and all joint in neck.” This innovative new system was created with Microsoft for release this fall. The complete Master Chief is available, but Kotobukiya will also offer separate armor sets as well as the body piece alone, to allow different starting points for collectors.

Additionally, they announced a release for the Master Chief Mark V and Mark VI ArtFX+ 2-pack in red and blue. Yes, that Red versus Blue. This will come with 2 body suits, 2 armor sets, various weapons, and the iconic bases. This is due out in November 2015.

Video game statues are in abundance. Street Fighter continues the Bishoujo line with Juri coming sometime in May, Sakura due out in September, and Poison in the initial art stages. Tekken’s Bishoujo line also continues. The Anna Williams Bishoujo is due out in June and it pairs perfectly with Nina Williams. They announced at WonderCon that another character is coming, so keep your ears to the ground, Tekken fans.

The Horror Bishoujo line will continue in the fall, following up the Freddy Krueger and Jason Voorhees Bishoujo statues available now.

Kotobukiya also announced that they will create the creatures from Alien in the ArtFX+ 1:10 scale. There are two sets in the works and no plans for the humans at this time.

Marvel will see a flurry of Kotobukiya pieces, starting with Avengers: Age of Ultron. Due in August 2015 are the Hulk and Hulkbuster ArtFX+ statues that create a scene together (sold separately). The immense scale of the Hulkbuster is truly impressive, plus Kotobukiya received digital data from Marvel to create this unique pose. Also coming is the Iron Man Mark 43 ArtFX statue, due in September 2015 and featuring lights in the eyes, chest, and palms.

The Wolverine Brown Danger Room Sessions Fine Art Statue is coming very soon with two interchangeable heads. The Carnage Fine Arts Statue is coming in June 2015 with an interchangable arm. The Rogue Danger Room Sessions statue is due in November 2015 and will feature two head sculpts with differing hair styles. There are no plans for a matching Gambit.

An exciting announcement was the upcoming Black Panther statue! Designed by Eric Sosa, more information is coming soon but this is going to be an amazing piece.

As far as Marvel Now, Deadpool ArtFX+ is coming with multiple accessories as both the traditional red and black, as well as the X-Force black and grey, costume. The X-Men ArtFX+ line brings Cyclops in October 2015 and the first announcement for Emma Frost!

Marvel’s Bishoujo line continues with She-Hulk in May 2015, Wasp in September 2015, and an unannounced date for Lady Deadpool – with two portraits for masked and unmasked.

Not to be left in the lurch, Kotobukiya also spoke to their DC Comics line. The Lil Gotham figurines will be blind-packaged based on the art of Dustin Nguyen. They will be available in different colors with pink as the chase variant. 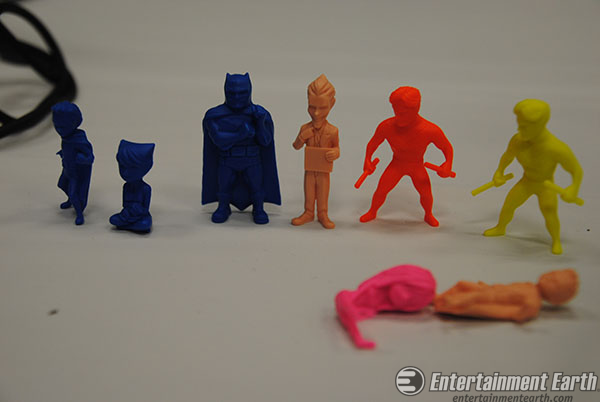 The ArtFX line continues with The Flash, as sketched by Jim Lee during a visit to the Akihabara location. It follows the Superman, Batman, and Wonder Woman ArtFX statues. Because the line is doing well, it is expected to continue.

Coming up are epic ArtFX+ statues for Arkham Knight. These dynamic pieces showcase Batman and the Arkham Knight and will definitely complement each other. More information is coming soon.

The Super Powers Collection is based on the 1980s Kenner line, but they are non-articulated statues that are designed to give the impression of moving. First up is Superman with a cloth cape and additional arm piece. Then come Green Lantern, the Flash, Batman, and Robin – all due out this year. Yet to come are Hawkman and Wonder Woman, plus potentially an extended line-up of villains. 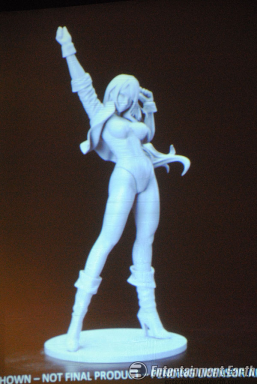 The DC Bishoujo line includes Batwoman (available now), Zatanna (July 2015), Black Canary, and Raven. The first sculpt for Black Canary was revealed at Wondercon and this design will feature fishnets, much like Zatanna. Raven is in early art and sculpt designs and may be released this year.

During the question and answer section, Kotobukiya stated an interest in re-releasing second editions of previous Bishoujo statues. They don’t want to decrease the value of the older statues, but they do want to provide for newer collectors who didn’t have a chance to get previous statues. This will likely be in new paint deco or box designations, but not new tooling.

They are also working with Disney on the Star Wars line and may look to continue the Star Wars Bishoujo statues but could not comment at this time.

After finishing the heroes, Kotobukiya would like to expand their Marvel line with villains. Any potential Guardians of the Galaxy products will be during the next film’s release.