When Push Comes to Shove, These Wooden Puppets Are Fun!

Stress balls, fidget spinners… when it comes to small interactive gadgets that help occupy the mind, these are among the most popular today. But before these contemporary contraptions existed, millions spent hours playing with wakouwas – more commonly known as push puppets.

Initially rising in popularity during the 1930s and ’40s, these wooden figures are designed to move and groove, collapse and stand back up again – all depending on how the hidden button is pushed on the bottom of the base platform. And though they have evolved through the years, one thing has remained consistent. Push puppets are fun!

New Wooden Push Puppets in Time for the Holidays

In 2016, Entertainment Earth unveiled a new line of retro-inspired wooden push puppets, and the popular line keeps growing. Just announced for pre-order, the Fall 2017 line of Entertainment Earth Wooden Push Puppets include four new characters that will arrive in time for the holiday shopping season. 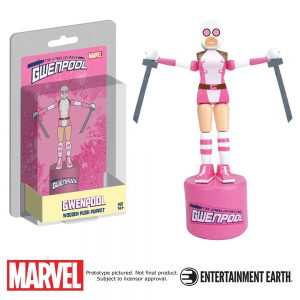 SUPERGIRL™ and ROBIN™ are welcomed into the DC Comics series along with the previously released WONDER WOMAN™, BATMAN™, BATGIRL™, and THE JOKER™ wooden push puppets.

Each figure is designed in a 5-inch scale and features a blend of vivid hand-painted details along with limited decal elements that make the 360-degree artwork pop from every angle.

To check out the complete line of Entertainment Earth Wooden Push Puppets, be sure to visit entertainmentearth.com for all the details.

Collectibles Exclusives Fun Collectibles Superhero Collectibles
Related ItemsDCDC ComicsGwen StacyGwenpoolMarvelpush puppetRobinSpider-GwenSupergirl
← Previous Story To Be the Man, You Gotta Dress Like the Man!
Next Story → These Are the App-Enabled Droids You’re Looking for