You Won’t Believe How Phenomenal These WWE FOCO Bobble Heads Are! 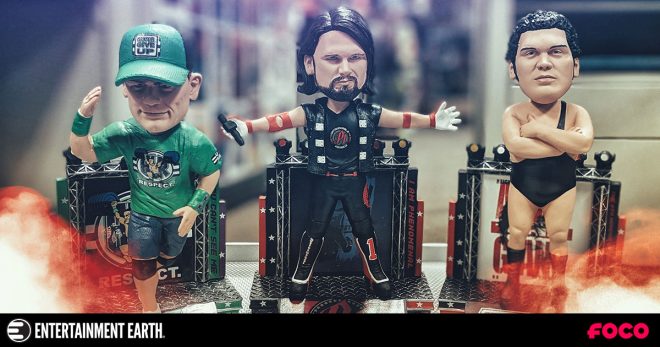 If you’re a wrestling fan, you know that we are deep into WrestleMania season. If you’re a fan of collectibles, you probably know about FOCO (Forever Collectibles) – you might even have a couple bobble heads on your shelf. Now both worlds collide in an epic main event, FOCO’s new WWE 8-inch bobble heads. These WWE bobble heads are everything you would expect from FOCO, the craftsmanship is superb, each hand-made, hand-painted resin statue comes in two pieces (the figure and the base) inside a well-packaged box. The figure easily attaches to the custom made entrance ramp, which gives each bobble a real sense of movement.

The WWE FOFO bobble head lineup includes AJ Styles, John Cena, Andre The Giant, Ric Flair, The Rock, and Ronda Rousey! AJ Styles comes dressed in his phenomenal red attire in his “phenomenal” pose, arms outstretched with a mic in one hand. John Cena is captured half way between his classic salute and sprint to the ring. Not only is Cena’s gear ultra-bright green but the entrance is too. Finally, the Hall of Famer, Andre the Giant stands tall and proud at the top of the ramp in his iconic pose with arms folded.

These FOCO bobble heads make the perfect addition to any collector’s display. You don’t have to be a wrestling fan to appreciate the quality of these statues. And if you happen to be a wrestling fan, these three particular statues are legends and definitely belong in your collection. Get yours now before they sell out and lay the smack down on your jealous friends!