A photo of the Batmobile surfaced early yesterday, causing a stir in the community of Dark Knight fans. Although the photo of the first real full look at the new Batmobile from Batman v Superman: Dawn of Justice was received well by its audience, the photo had been taken on the street by a fan and was not very high quality. Director Zack Snyder responded to this fan photo with a photo of his own of the infamous and completely AMAZING Batmobile, taken by official Batman v Superman photographer Clay Enos. Can we say badass?

This image was posted on Snyder’s Twitter account, which has proven to be a great resource for fans who want to get the first sneak peeks of amazing and highly detailed images from the set. In fact, Snyder had back in May sent out the first teaser images from Batman v Superman. His teaser photos had hinted at the size, style and shape of Batman’s ride, although not until now have they revealed the Batmobile in its full majesty.

Along with the automobile itself is the “info” Snyder posted alongside it.

And how true that is. The Batmobile photo in its stunning clarity is one to admire, if not to be a little intimidated by. Tell us, what do you think of the look of the new Batmobile? What do you think Zack Snyder will reveal next? Tell us in the comments below! 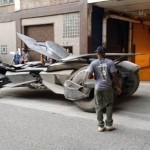