Quiz: Trick-Or-Treat in The Twilight Zone

I’ve often wondered why marathons of The Twilight Zone show up on New Year’s Eve and the Fourth of July, but not at Halloween.

If any holiday is a natural fit for creator Rod Serling’s unique and often uniquely creepy blend of fantasy, horror and science fiction, it’s Halloween! What other time of year transports us so easily into (as the series’ first season introduction phrased it) “the middle ground between light and shadow, between science and superstition… between the pit of man’s fears and the summit of his knowledge”?

For some unfathomable reason, recent years have seen May 11 designated “The Twilight Zone Day.” No one seems to know why. The series premiered on CBS on October 2, 1959. Only one episode originally aired on a May 11, and it’s not generally regarded as one of the show’s highlights (“Young Man’s Fancy,” in 1962). And Serling was born on a different holiday’s date altogether – December 25, 1924!

So, submitted for your approval: Let’s make October 31 “The Twilight Zone Day”! With all the ways that we already celebrate “the dimension of imagination” on Halloween – fanciful costumes, elaborate lawn displays, spooky ghost stories – we’re already more than half way there! 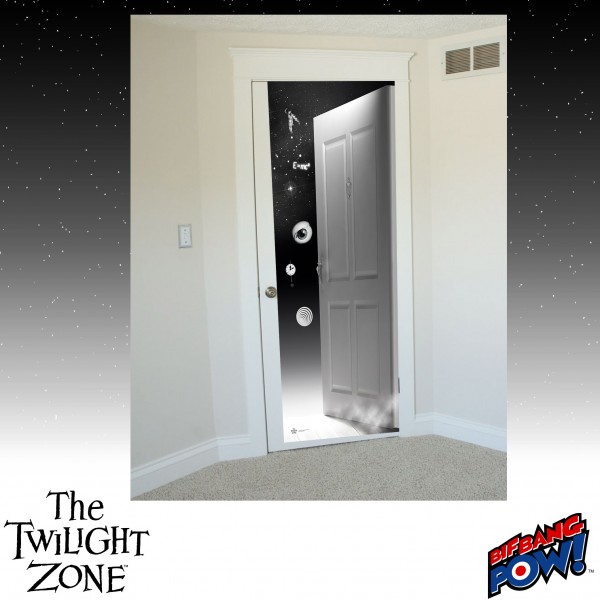 With this striking vinyl decal, you can turn any door in your home into a door unlocked with the key of imagination. This image of the door from the series’ most familiar main title sequence, opening onto a star field punctuated by symbols of “shadow and substance, things and ideas,” invites all who cross your threshold to look at things in a different twilight. Measuring about 80-inches high and 32-inches wide, the decal fits most standard doors. Its low-tack 3M adhesive lets you remove and reapply it without hurting your decal, your doors, or your mental health.

“The Eye of the Beholder” is easily one of The Twilight Zone’s most memorable and powerful episodes. Serling’s parable about the pernicious nature of the desire for “glorious conformity” speaks a word as urgent today as when it first aired. These color figures remind us that true ugliness and true beauty are matters not of the flesh, but of the mind and heart.

Don’t make us wish you into the cornfield! Just think good thoughts when adding this wonderful figure of little Anthony Fremont (he’s a real good boy—we love that boy!) to your collection, and every day will be a real good day! Oh, that jack-in-the-box he comes with? Don’t worry about that jack-in-the box—trust us, it’s swell, just swell! (Seriously. Stop asking about the jack-in-the-box.)

Serling gave pop culture one of its most enduring Christmas presents with “Night of the Meek.” This whimsical and warm script expresses his conviction that, as he says in his closing narration, “there’s a special power reserved for little people.” Holiday magic turns Henry Corwin from a drunken, down-on-his-luck department store Santa into the real thing. This color figure would make a great gift for that special someone on your “nice” list—or, in the spirit of the episode and the season, even your “naughty” one! 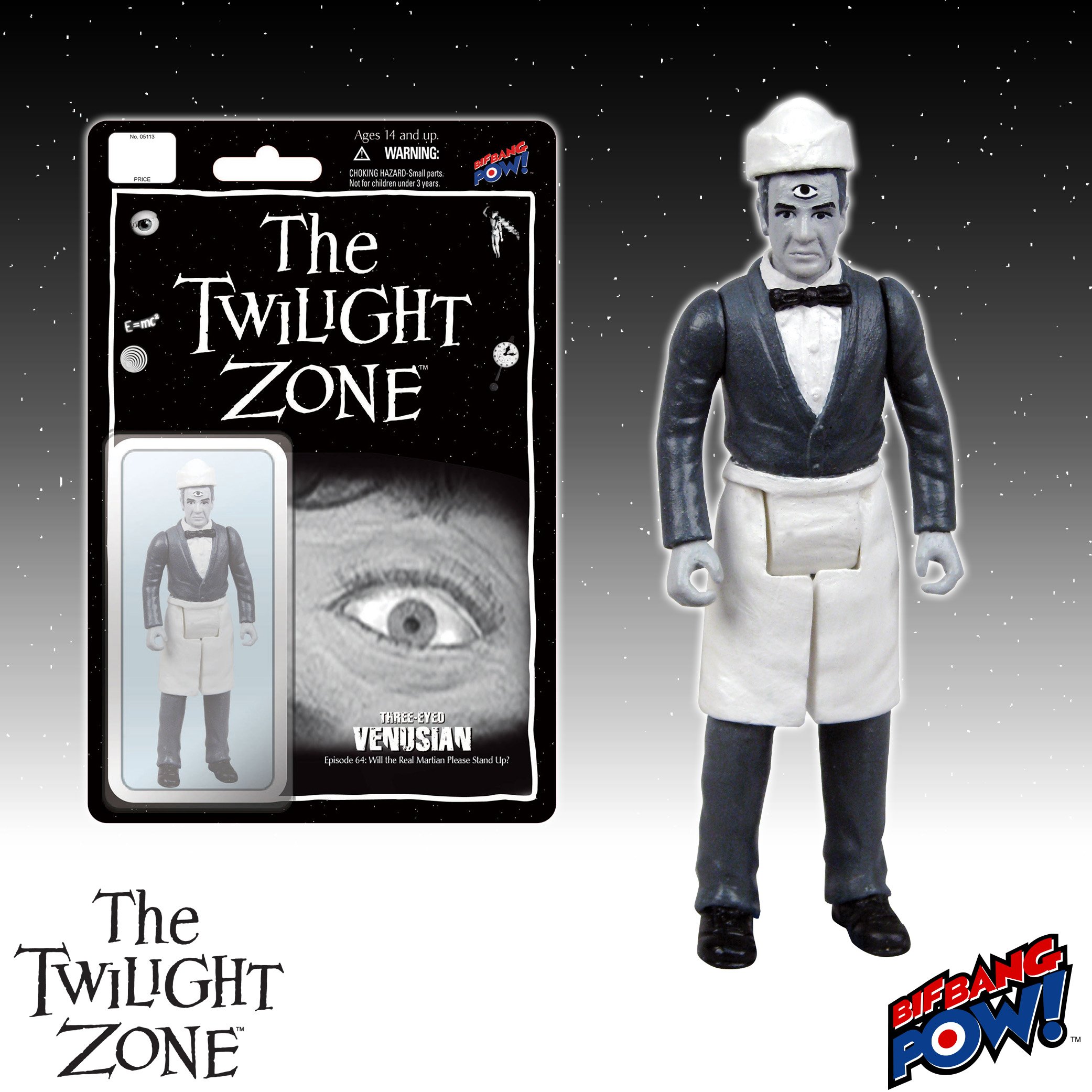 The Twilight Zone featured several extra-strange extraterrestrials during its run—the man-serving Kanamits, for example, and the hollow-eyed aliens who abduct Frisby—but this Venusian kept a low profile in “Will the Real Martian Please Stand Up?” by keeping his third eye hidden under a soda jerk’s cap. Appearances can be deceiving, especially in The Twilight Zone!

Hansen wasn’t the main character in “A Quality of Mercy”—that was Lieutenant Katell, played by future Quantum Leap and Battlestar Galactica star Dean Stockwell—but Hansen was played by Leonard Nimoy, three years before he put on Mr. Spock’s pointed ears to film Star Trek’s first pilot. This World War II figure comes with a removable helmet, rifle, and field radio. It’s an excellent commemoration of both a great actor in an early role and another eloquent episode by Serling lamenting the futility of war.

“Nick of Time” isn’t as action-packed as William Shatner’s other The Twilight Zone appearance, “Nightmare at 20,000 Feet,” but it’s always been my favorite of the two. The Mystic Seer machine—a miniature version of which accompanies this figure—is one of the series’ most visually memorable props. But more important, Shatner’s performance as Don Carter, no less than Patricia Breslin’s as his strong and supportive wife, starkly illustrates a pressing choice we all face. Serling spells it out in the closing narration: Will we face the future “with a kind of helpless dread… [or] with confidence”?

What’s your favorite The Twilight Zone episode? Tell us in the comments below!